Michael Reuscher is a PhD student at Texas A&M University -Corpus Christi and a freshly minted submersible pilot engaged in the Finding Corals Expedition with Living Oceans Society. He has been reporting since June 5, sends this from the RV Cape Flattery, currently stationed off the coast of British Columbia.

Darkness in the submersible… Every 15 minutes I have to use my little flashlight to read the little gauges of all the vital systems: I am at 1500 feet. After devouring all these deep-sea books, attending deep sea classes and marveling at pictures taken from subs, I have bodily entered this alien domain.

The bottom around me is covered with brittle stars and anemones. Rock fish, sponges and cold water corals (Swiftia sp.) are also frequent dwellers here in the deep waters of South Moresby to the South of the island Haida Gwaii. With the manipulator arm, I was able to grab a stone with one of these small, white corals attached and bring it to the surface. Using a high definition camera we uncovered a fascinating microcosm: Several critters live on or in proximity to the corals, among the most intriguing ones a family clan of ghost shrimp (Caprellidae). 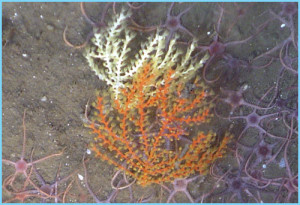 Before I hit the bottom I met some squids in the water column in panic from my looks, being the submersible’s of course. Aggressively, they tried to scare me back by ejecting their greenish-yellowish ink. Arrow worms, jellyfish, comb jellies, and different kinds of small crustaceans were frequent passersby on my ride to the bottom.

Besides the main purposes of the dives, the video transects and the sampling, there is also time in between to explore this fascinating remote place that probably no one has ever seen before. On one of my explorations, a halibut crashed into one of my HMI lights, leaving me startled, the fish bleeding and my light displaced. I hope the flatfish recovers from this hit.

I also saw a dazzling yellowish dome shaped object encircling a head-shaped silhouette. Top site supervisors must have been surprised when I told them that I see Tom in the other sub. What I did not know was that Tom’s sub that was launched at the same time was towed back on deck. The strong current made a synchronous dive too dangerous.

What I identified as the illuminated dome of the sub with Tom’s head turned out as a yellow sponge with a sea lily on it. When I told Tom that I saw a sponge that looks like him, he told me he would reconsider my grade of his class that I attended this spring semester.

4 Replies to “Michael’s First Dive in the Deep-Worker”