Dr. Erik Cordes is an Assistant Professor at Temple University specializing in the ecology of cold-seep and deep coral communities. He was Chief Scientist on the MMS sponsored Lophelia II cruise in Gulf of Mexico 2008 aboard the RV Nancy Foster, and he will lead this summer’s expedition with the Jason ROV aboard the NOAA flagship RV Ron Brown. 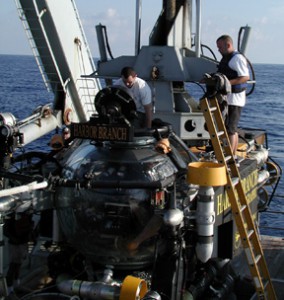 It was the Fall of 2002 and I was on a cruise on board the Seward Johnson II with the Johnson Sea-Link II submersible. We were trying to locate new cold seep sites to expand our understanding of the communities associated with them. On this dive we were headed to a new area that no one had explored yet, and I was in the front of the sub, in the 2m diameter plexiglass sphere. I have been lucky enough to have a good number of dives in the sphere, and this is one of the most amazing experiences I have ever had.

There is nothing like being on the bottom of the ocean and seeing it like this – not through a monitor, not through a little port-hole, but surrounded 360° by the deep-sea floor. You get an incredible feel for the landscape of the site. It is also incredibly exciting and inspiring for new students and well-established colleagues alike. That experience is irreplaceable.

When we got to the bottom and started looking for the tubeworms and mussels of the seep community, we started to see large mounds in the distance. I had heard of mud volcanoes, and thought that maybe this is what it was. As we got closer, we saw that they were mounds made of coral! I had seen Lophelia pertusa a few times before, but it had never been reported this far west in the Gulf. We explored this area for a while, very excited for our discovery. However, this was not the purpose of the dive, so after some photographs, we moved downslope to try and find the seeps.

We then came across a field of brightly colored tufts of black corals and long red sea whips – a large soft coral garden like you would see in shallow water. Again very beautiful, but not the goal. When we came to the bottom of the slope, we thought we might be getting close – there were dark stained sediments and the occasional little worm tube popping up out of the ground – evidence that we were on the edge of a seep (Cordes et al. 2006).

Then, I looked up and there was this big shape coming out of the distance. I turned to the pilot and pointed to it. A big jellie? A trashbag? What the heck was that? As we got closer, and it swam towards us, we realized that it was a large Mola mola, the Ocean Sunfish. It was amazing. We started to follow it as it slowly swam with its strange vertical fins propelling it forward. What was it doing here at 550 meters? I had seen one once before sunning itself on its side during a whale-watching trip when I was a kid, but in the deep-sea? After about 15 minutes of following it, the Mola began to get away and we decided to leave it alone. 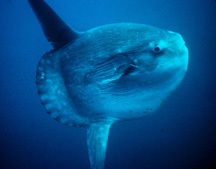 Now, what were we doing? Oh right, the seep. First we had to find the bottom again, as we had completely gotten distracted. So we descended straight down to the seafloor again. And guess what, the Mola had led us right into the middle of the seep! We had our pick of tubeworm aggregations to collect, so we set up at a good one, grabbed it with my favorite tool, the Bushmaster, stowed it and headed to the surface. After watching the bioluminescence and the bubble streams from the sub on the way back up, we completed my favorite JSL dive of all time.

3 Replies to “Reflections on the Johnson Sea-link: Dr. Cordes”