We’re collecting stories from researchers who worked with the Johnson Sea-link submersibles to help raise awareness about their plight, and to illustrate their unique utility for science. Dr. Christina Kellogg is a microbiologist with the USGS. She used the JSL to collect deep-sea microbes in a way that’s never been done before. 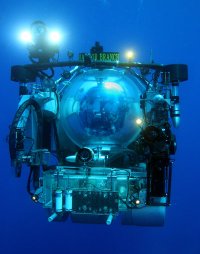 To counterpoint Dr. M’s post, I’d like to mention that the JSL is important to studying the entire spectrum of marine life, from big to tiny. The Johnson-Sea-Link submersible has been invaluable to my research on the microbial ecology of deep-sea corals (discussed previously at DSN here and here).

To accomplish my work, I needed to keep coral samples separate from each other in sealed containers, and in come cases, inject a preservation solution at depth. When no such sampling gear was available, my husband and I built a custom unit in our garage (small budget, big payoff!). The submersible team at HBOI was super accommodating. I drove my gear to Ft. Pierce multiple times to test its fit on the sub, and to see how the manipulator arm would handle it. The sub guys were always ready to haul this heavy thing out of its shipping crate and place it on the sub so we could do as many tests on dry land as possible. 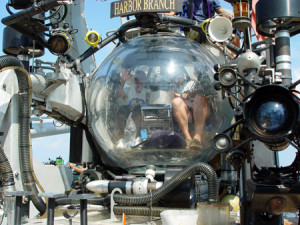 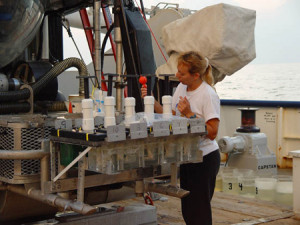 As a result, the gear worked perfectly the first time we deployed it at 1500 ft in the Gulf of Mexico and every time since. The only usable samples of deep-sea corals I have collected have come from the Johnson-Sea-Link. My luck with ROVs to date has been abysmal. ROV and AUV technology are great for a lot of things, but for delicate sample collection, in situ manipulation, and times when you just ‘have to be there’ there is no beating the Johnson-Sea-Link.

My first submersible dive was in the Delta, a two-person sub that looks like…a little yellow submarine. The scientist lies in a fetal position videotaping through a porthole, while the pilot sits above in the conning tower driving the sub. A few months later, I did my first dive in the JSL. I was in the rear compartment and felt I had really traded up since I could sit upright while videotaping through the porthole!

The five dives I’ve been fortunate to make in the front sphere of the JSL were another animal entirely. It’s not just the panoramic view of the seafloor (although that is a life experience in and of itself), but also the technical abilities of the pilots to use the hydraulic manipulator arm or suction hose to sample tiny pieces of coral.

Another huge plus is the payload, i.e., how much stuff you can collect with the JSL. There are multiple individual buckets, as well as room for a large biobox, racks of sediment cores (or mammoth sampling gear like mine), as well as cameras. When a research group has spent a lot of time and money to get to sea, it is nice to know you have the space to collect a little something for everyone during the dive (fish for the icthyologist, crabs for the invertebrate taxonomist, rocks for the geologist, corals for all sorts of biology-types…).

At a point where our country is willing to pony up billions (with a B) to bail out failing banks and car manufacturers, I would like to suggest that funding the HBOI subs and ship is a significantly better investment with practically unlimited opportunities to recoup that investment in scientific discoveries.

Having said that, it should be noted that these are my personal opinions and not those of my employer…the Federal Government.

4 Replies to “Reflections on the Johnson Sea-link: Dr. Kellogg”