To celebrate World Ocean Day, Deep Sea News is publishing an unsolicited letter from a reader, Bob Breen. We’re thankful that our community is the kind of people willing to share their opinion about respect for the oceans, and we’re pleased to publish your letters.

On June 8, people all over the world will observe World Oceans Day, celebrating the 70% of our planet that’s covered by salt water. This years’ theme, “One ocean, one climate, one future,” reminds us that the world’s oceans are all connected, and that the choices we make today will have ripple effects for generations to come.

In a changing world, our ocean needs the same sort of protections we have established for important landscapes for decades. The California coast has been called one of the most biodiverse ecosystems in the world, and it should be managed according to standards set by marine scientists. Scientists believe we have to set aside parts of the ocean to ensure it’s long-term health. Like underwater parks, marine protected areas allow marine animals and plants flourish, and help ecosystems absorb the shocks of change. And make no mistake; we are living in a time of change.

Climate change has already arrived on the California coast. During my 40 years as a student and ranger-naturalist at Moss Beach in San Mateo County, California, I saw changes to intertidal plant and animal life firsthand. Warm water species of sea anemone, worms, and barnacles have moved in and cold-water, leafy seaweed have been replaced by algal turf reminiscent of Southern California.

Although many naturalists, fishermen and divers have observed these changes, we don’t entirely understand them. Marine protected areas can help—they provide a window into ocean ecosystems, functioning as underwater laboratories. Francis et al. (2007) describes protected areas as reference sites that can help biologists disentangle the local effects of fishing from the global effects of human activities and account for ecosystem change over time. As our understanding of human impacts on the ocean grows, so will our ability to manage for ecosystem function and resilience. 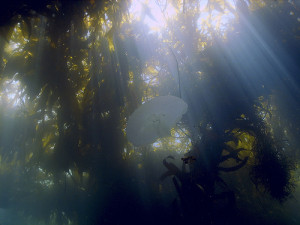 Medusa flotaing in a kelp forest

Climate change, by definition is a global problem. But addressing it will require an all hands on deck approach. Local protection of key biogenic habitats is a key part of the solution—it will aid in the maintenance of ecosystem function by limiting long-term damage from human activities. It takes political will to implement a scientific, ecosystem-based approach for ocean health, but the need is clear.

In 1969 a small marine protected area was established at Moss Beach. Even then it was controversial, but the results surprised people. Moss Beach soon became a tourist attraction—it drew Bay Area schools for field trips, and visitors from across the country and around the world. Rather than taking something away from the community, it has provided a boost to the local economy.

Now California is working to replicate the success we’ve had at Moss Beach and the Channel Islands by creating a statewide network of marine protected areas through the Marine Life Protection Act. The Act is being implemented through a science-based public process, and is about halfway done. Right now, the Fish and Game Commission is considering plans for a network of protected areas that will stretch from Half Moon Bay to Mendocino.

In early August the Commission will adopt one of the plans that local divers, anglers, surfers, and scientists spent over a year creating. They will look especially closely at one proposal, the Integrated Preferred Alternative (IPA), which is a compromise plan recommended by the Governor’s Blue Ribbon Task Force.

The compromise plan follows scientific guidelines for holistic, risk averse, marine resource management. If enacted by the Fish and Game Commission, the plan will support a more resilient, biodiverse ocean, better equipped for the uncertainties of climate change. And it will help ensure that our kids can enjoy the abundant coastal resources our parents experienced.

As a naturalist, a long-term manager of a marine protected area, and someone who has spent countless volunteer hours helping to map out a plan for a healthy and sustainable ocean, I ask that the Fish and Game Commission adopt the compromise plan for the north central coast. And I ask the community to embrace it as well. It is our legacy and our gift to future generations, who will be able to experience and fish in a healthy ocean thanks to our foresight.