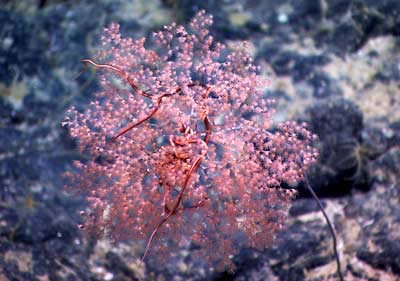 I mean it, FOREVER!  No paper out yet but the abstract has sufficiently enticed me.  Mosher and Watling report that the species Phiocreas oedipus, an echinoderm that kills its father and marries it mother, is only found on the octocoral Metallagorgia melanotrichos. They find a positive correlation between size of the brittle star and the octocoral and suggest that juvenile brittles stars settles on the a young octocoral and “the two species then grow, mature, and senesce together”.  The octocoral mooches shelter and  a platform off the seafloor to suspsension feed on floating particles.  What does the coral get? Not damn thing. 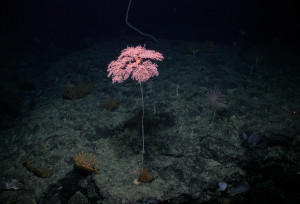 Colony of Metallogorgia melanotrichos on New England Seamount Chain. Image courtesy of the Mountains in the Sea Research Team; the IFE Crew; and NOAA.