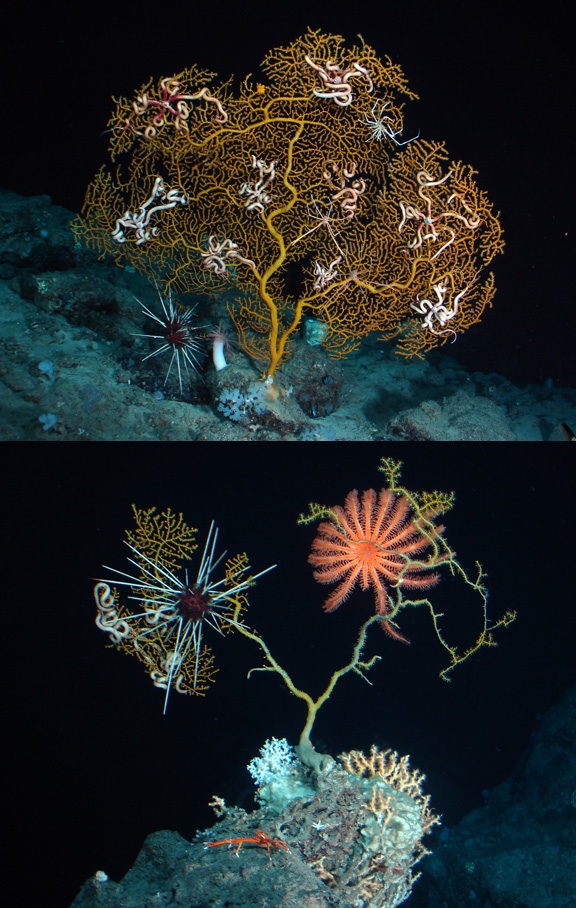 People accept the idea of echinoderm predation on shallow reef building corals. The voracious Crown of Thorns seastar Acanthaster planci is a familiar coral antagonist on the Great Barrier Reef, part of a natural process that may or may not be amplified by anthropogenic disturbance. Asteroid predation on deep-sea corals is more difficult to demonstrate.

Hippasteria sp. has been caught in the act feeding on deep-sea Primnoa (Krieger & Wing 2002) and Isidella octocorals (Etnoyer 2008), but brittle stars and echinoids are typically considered commensal associates. Some ophiuroids (brittlestars) are obligate commensals, “partners for life” on deep-sea Metallogorgia corals (Mosher & Watling 2009).

Something in the image above tells me this sea urchin is up to no good, but I’m having a hard time convincing others that a culprit is present. The party line is that associates brisingids (sea star, bottom image) and ophiuroids are suspension feeders. Chris Mah was non-plussed when I sent these. My fortune cookie said “one observation is not data, Grasshopper, it’s datum“. Still, you’ve got to wonder, can echinoderms have their deep-sea coral habitat and eat it, too?

Special thanks to ScubaGeek Steve Craig for sharing these images, and great appreciation to Karl Stanley of Stanley Submersibles for tracking Steve down on Deep Sea News’ behalf.

6 Replies to “Friday Picture: Have your coral and eat it, too?”