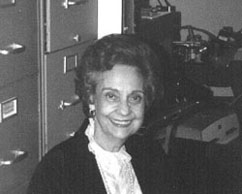 As a taxonomist and marine biologist, it is very hard to lose “one of us”. There are not many around and each loss is a shock to the system. The loss of Isabel Farfante is a huge loss for crustacean taxonomy. I’ve never met her, but I’ve read many of papers and monographs. Her work was thorough and very useful to more people than she probably knows. Although she was a crustacean taxonomist, the first paper of her’s that I read was on the molluscan limpet genus Diodora.

Here is a short bio from the Smithsonian website A Brief History of the Department of Invertebrate Zoology.

24 July 1916  – Carcinologist Emeritus, U.S. National Marine Fisheries Service, Systematics Laboratory. Born in Havana, Cuba, she received her Ph.D. from Radcliffe College (1948). She was professor and researcher at the University of Havana; director of the Cuban Centro de Investigaciones Pesqueras; and associate in Invertebrate Zoology, Museum of Comparative Zoology, Harvard University. She has authored zoology textbooks, and numerous papers on the systematics of penaeoid shrimps, most notably landmark studies of the commercial genus Penaeus. She is senior author of the book Penaeoid and sergestoid shrimps and prawns of the world (1997). (Married name: Isabel C. Canet)

Isabel was 93 and passed on in her home in Key Biscayne, Florida in the company of her family. Ray Bauer notes on the Crustacean listeserve this morning:

Isa was a truly great scientist and carcinologist, born in Cuba, who received her doctorate at Radcliffe and went on to a prominent career as professor and marine biologist in Cuba. She was forced to flee Cuba after the Castro revolution but became established with the National Marine Fisheries Service branch at the National Museum of Natural History (Smithsonian Institution), with a laboratory in the Division of Crustacea.