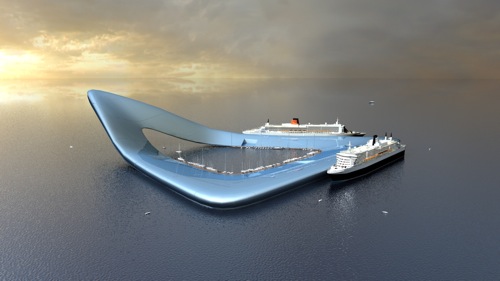 Cruise terminal at the Palm Jebel Ali, for Dubai illustration from Waterstudio.NL

Waterstudio is an inspiring design house in the Netherlands dedicated to architecture “in, on and at the water.”  At Design 51 you can read an interview with architect Koen Olthuis, co-founder of Waterstudio.

The biggest challenges are stability and sustainability. We want to design perfect floating developments that last at least as long as normal buildings on land with a comfort that can be engineered upfront. Sustainability on water is even more important than on land. Emission has to be zero and power plants must be self-supporting and sustainable in nature such as solar, wind and wave energy. However, the biggest challenge is soci0-economic which means that we have to explain users, developers and decision-makers that floating developments is next step in world-wide urban development. We need to explain to them that it is safe, long-lasting and technically and economically feasible.

In 2007 Olthuis occurred on the Time Magazine’s list of most influential people in the world.  His structures are innovative and awe-inspiring while providing functionality.  I also enjoy the fluidness and tranquility of the structures that recess into their marine setting. The newest project to capture everyone’s attention, including PopSci, is the Citadel.  A structure housing 60 apartments, parking garage, floating roadway, and of course boat docks.  All apartments have waterfront views via a garden terrace with additional greenhouse throughout the structure.  The Citadel will use submerged pipes that will pump water through the the structure for cooling. 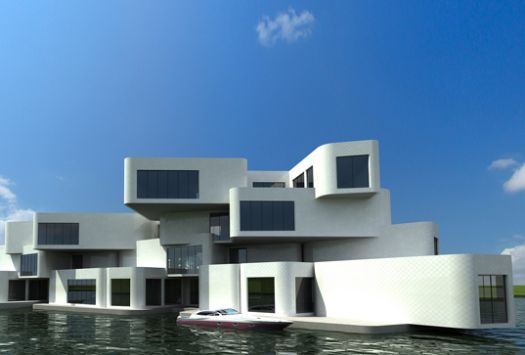 The Citadel, Illustration from Waterstudio.NL 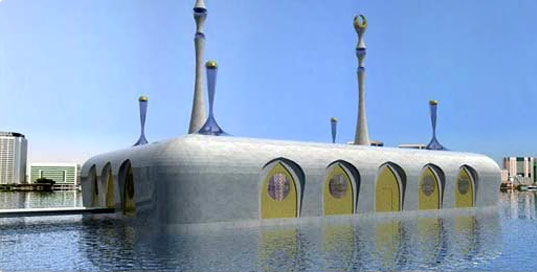 3 Replies to “Living On The Water”