If there was a mountain in your backyard with no name, how long do you think it would stay that way? Not very long. Some intrepid explorer would climb it, map it, and name it. In the ocean, though, many mountains are unnamed, and unexplored.

There was a time when I lived in Los Angeles when I had lots of time to think about seamounts. I worked from home in a sweet apartment with a roof deck overlooking three different kinds of fruit trees. Life was good. I made maps for kicks in my spare time. My girl and I ate out nearly every night. Choosing a restaurant and a movie was actually the most difficult part of our day.

Then one day I met Dr. Craig McClain at a seamount conference in Vienna, Austria, and liked him immediately. Someone told him I had too much time on my hands. A month later he asked me to join his blog. With that, I was sucked into a 4 yr whirlwind. The blog got huge, I got married, went back to school, had two kids, and a PhD. Now, I am living in gratitude.

Here’s a gift, then, Craig, from when I had lots of time on my hands. Thanks always.  I hope you find this Northeast Pacific seamount map handy. It looks real nice on glossy paper. I like it because the image shows clearly that there’s two kinds of seamounts- those within federal jurisdiction, and those without. Unnamed seamounts are fairly common, so there is much to explore. Even the named seamounts are untapped.

Best of luck in your adventures, Craig, and thank you for this one. Kevin, rock on, brother. There’s a shrimp out there with your name on it. Thanks for making Deep Sea News such a beautiful site. 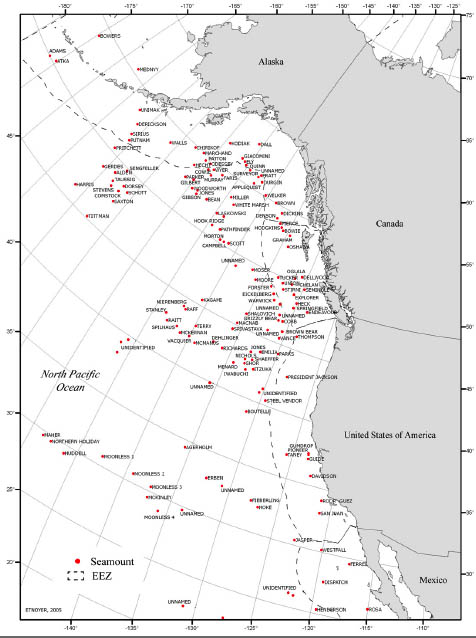 Named and unnamed seamounts in the Northeast Pacific. Etnoyer, 2005.