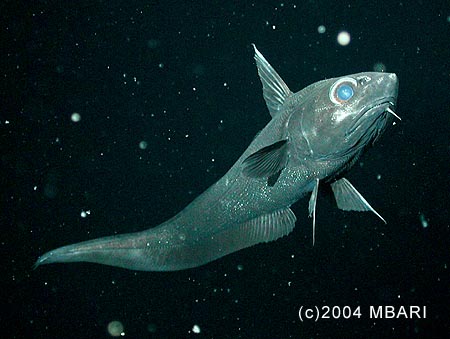 Photo courtesy of MBARI. Coryphaenoides acrolepis in Monterey Canyon. Rattail fish are caught and sold under the more palatable name, "grenadier." However, the Monterey Bay Aquarium's Seafood Watch program recommends that consumers do not purchase or eat grenadier because the fish grow very slowly and may not reproduce until they are 30 or 40 years old.

The 285  macrourid fishes, the rattails, whiptails, and grenadiers, are one of, if not the, most abundant fish in the deep.  You cannot throw…well anything…without hitting one.  What do all these fish eat?  In one scenario, macrourids feed on organisms living on the seafloor, that in turn originally feed on detritus, i.e. marine snow, raining from the surface.  Or these fish could cut out the middle man and feed directly on dead prey originally from surface. Or they could do both?

In simplified terms, phytodetritus is consumed by deposit feeders, which in turn are consumed by primary carnivores and so on to the top trophic positions including many fishes.  However, an alternative trophic pathway exists. Many deep-sea fishes are attracted to cameras baited with pelagic carrion and a few studies have noted carrion in their diets.  However, these observations have rarely been quantified. Scavenging on the sunken carcasses of epipelagic nekton bypasses the conventional benthic food web, although the beginning of each path shares primary production in surface waters. The relative importance of these 2 trophic pathways remains uncertain.

The question may seem trivial but the answer gets at nothing less than the pathway of carbon into the deep, and impacts how we understand carbon cycling and sequestration. A new study by Drazen et al. in Marine Ecology Progress Series examines the fatty acids of two macrourids and a whole host of their potential prey items.  All the samples were collected from the well-known Station M site (see map).

What is generated from the data are the two plots below.  All you need to know is that the closer two points are on the graph the more similar the fatty acid content of their tissue.  The first plot is for macrourids and benthic prey and the second plot adds a few more pelagic prey.  Macrourids are black, echinoderms green, polychaetes, orange, anemones purple, crustaceans blue, and either living or dead on the seafloor, depending on the plot, pelagic species in red. 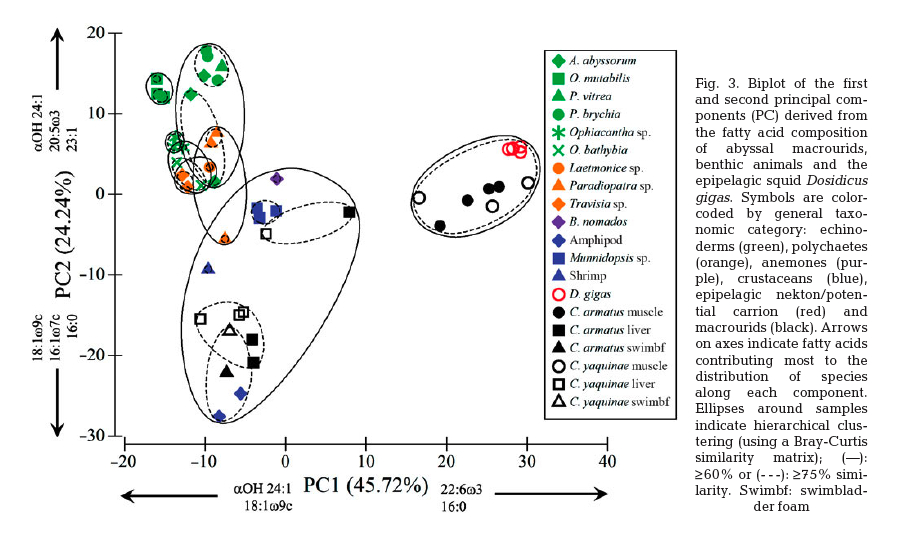 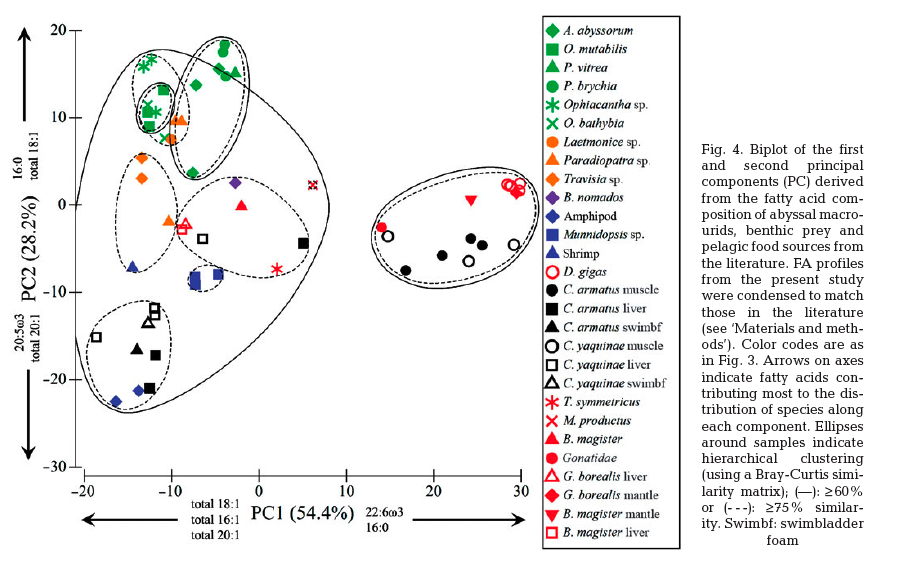 So it is obvious what is going on here , right?  Benthic crustaceans and pelagic-derived carrion taste good.  Echinoderms and polychaetes not so much.

So Number 1, as the press release for this paper states “This indicates that epipelagic populations constitute a significant part of the diet in abyssal fishes”, and thereby circumventing part of the food web.  And Number 2, no doubt making Chris Mah smile, and a bit of conundrum, is that they do not eat echinoderms.  As Chris Mah would quickly tell you, probably over cocktails at a party, echinoderms are one of the most dominant taxa in the deep.  You cannot throw a macrourid without hitting one.  Why do macrourids, obviously opportunistic scavengers/predators, not eat the most abundant food source in the deep?