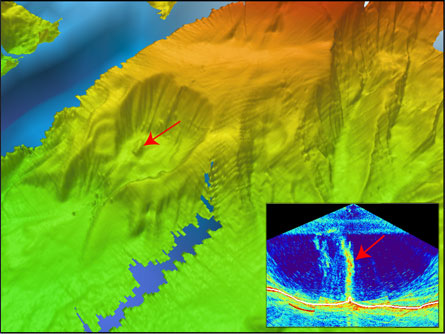 A mysterious plume, possibly a stream of ice-covered methane bubbles (inset arrow), rises about 1.4 kilometers from the seafloor off the coast of California. The plume originates in a previously unknown, amphitheater-shaped scar (main image, arrow) on the ocean bottom about 32 kilometers northwest of California’s Cape Mendocino.

A recent oceanographic survey on the NOAA ship Okeanos Explorer led by James V. Gardner, a marine geologist at the University of New Hampshire, discovered a 1400 meter tall plume (4.3 Eiffel Towers) rising from the seafloor off California.  The plume may have originated with a recent massive landslide that created the 3.6km “amphitheater-shaped” scar.

Water samples above the plume did not have high mineral contents, suggesting the feature is not a hydrothermal vent.  Gardner reports his teams findings in Eos, a weekly newspaper from the American Geophysical Union for members (can someone send this to me?).  The team thinks the plume is a methane gas bubbles coated in a veneer of methane hydrate ice, that quickly dissolve in warmer lower pressure water.

One Reply to “The Creation of a New Deep-Sea Feature”