…and I thought I was burdened with gear 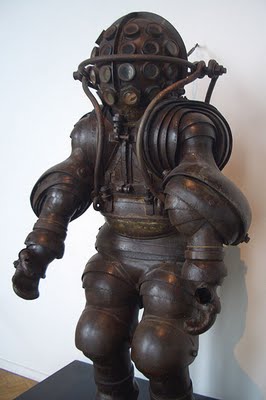 837lb diving suite designed by the Carmagnolle brothers in 1882

The sole example of this steampunkesque diving suit appears Musée de la Marine in Paris. Built by Alphonse and Theodore Carmagnolle  with 20 portholes the entire suite weighs in at 837 pounds.  You can get a bit of the history and the specs over at Diving Heritage.  Be careful not to head over unless you totally are prepared to give up a few hours exploring the world’s largest virtual dive museum featuring over 300 helmets!