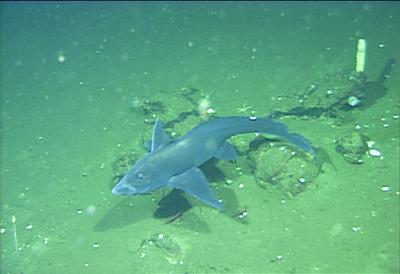 Chimaeras are sharks much cooler cousins.  They are not sharks, i.e. elasmobranchs, but rather a whole other subclass, Holocephali, that split from sharks nearly 400 mya.  They are primarily deep water which only endears them to me more.  Chimaeras differ from sharks in subtle and not so subtle ways.

Much different from their toothy cousins, male chimaeras have retractable sexual appendages on the forehead.  So now that you have that picture in your head, consider there is now one more known species of Holocephali. The new species, the Eastern Pacific black ghostshark (Hydrolagus melanophasma, Greek for ‘water rabbit’ and ‘black ghost’), was described in the September issue of the international journal Zootaxa.  The new species is from deep water off central California down to the Sea of Cortez. As one of the author’s of the paper states ‘They have this club on the top of their head with spikes. People think it’s used for mating. It’s like a little mace with little spikes and hooks and it fits into their forehead. It’s jointed and it comes out. We’re not sure if it is used to stimulate the female or hold the female closer.”

It’s days like this that I really appreciate the diversity of life.  Below the fold a nice video, with horrible music, of shallow water chimaera.

Update: Greg Mayer has reminded that the organ on top is not genitalia, i.e. involved with gamete transfer. It is a hypothesized reproductive organ thought to “to stimulate the female or hold the female closer.”  Jerry has wonderful post with pictures of both the organ on the forehead as well as the claspers (actual genitalia)! So I mention this because in my exuberance for a creative title I used the term genitalia.  I now corrected this.

16 Replies to “Another Species With Forehead Sexual Organs”