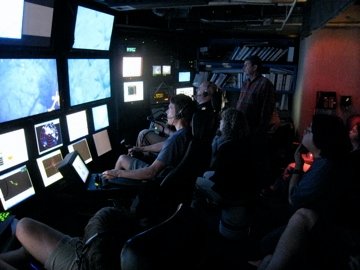 In the ROV control room. You can see Chris there on the right with his left hand on his chin. I am in the background about dead center (the bald one with the headset on doing my cheif scientist thing.

Chris Mah provides the next installment of his ongoing series covering our previous cruise.  Although I think Chris is buttering me up

and here is Dr. Craig McClain, writer of Deep-Sea News, here working on stuff!! blogging? writing mission reports? Power Point presentation? Craig worked so hard on this cruise I got tired of watching him after the first day!