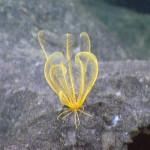 We dove Wednesday on North Cleft (45.030268, -130.182166), a massive ravine over 100 meters deep and a few hundred meters wide formed by the spreading of the Juan de Fuca and Pacific Plates. At 2.5 kilometers depth, we explored three inactive hydrothermal vents, the tallest being 15 meters high, roughly the height of a 4-story building. As active vents these structures provided the raw materials of life to dense communities possessing several phyla, today we only saw hints of the communities that once were. Rusticles, iron stalagtites, hung off the extinct vents lending an eerie atmosphere to the scene. We quantified the communities on a lava flow dated to 1986 and a much older but yet to be dated lava flow. These are the next data points in our analyses of exploring how these communities shift through time.

A major storm in North Pacific drove us south on Wednesday, forcing us to abandon two more dives on the Cleft segment scheduled for Thursday and Friday. Instead we opted for additional dives on the President Jackson Seamount and the Gorda Ridge, which will keep us well out of the storm’s path. With deep-sea exploration you always count on lost days at sea due to equipment or weather. Contingency plans are prepared well in advance, and adjusted on the fly, to maximize our time and science on seafloor.

Chris Mah happy as a urchin in ethanol collecting echinoderms in the NE Pacific. Photo courtesy of MBARI.

On Thursday, we conducted the first of two dives on the President Jackson Seamounts. Our first dive (42.819173, -128.16031) began in a caldera floor. By dive’s end, we finished on the caldera wall nearly 300m shallower than we started. Unlike our previous dive sites with jagged landscapes of hardened lava, the caldera floor was smooth with sediment collected over the many 100’s of years since this was geologically active. This is the land of echinoderms. In retrospect not so atypical for the deep sea or our dive sites so far, but I am amazed nonetheless by their tremendous densities. We saw our first barnacles today. Attached to rocks with their goose-like necks, from the distance their numbers suggest meadows of wildflowers. Yellow, white, orange, and pink corals hung on the caldera rim strategically placing their polyps off the bottom into better currents for feeding. We saw a massive 14-armed seastar nearly one meter across perched on volcanic rubble. My first gastropod of the trip was a highlight and, after the many kilometers of seafloor we have traversed, a welcome friend. Well… a welcome friend you remove from their natural habitat, cage, transport through the most extreme conditions, and then place in a jar with alcohol. The other Dr. M. hauled in echinoderms disparate in color, function, and form with many potentially new to science. Today’s dive reminded me both of the wonder of the deep and the creator’s inordinate fondness for invertebrates.