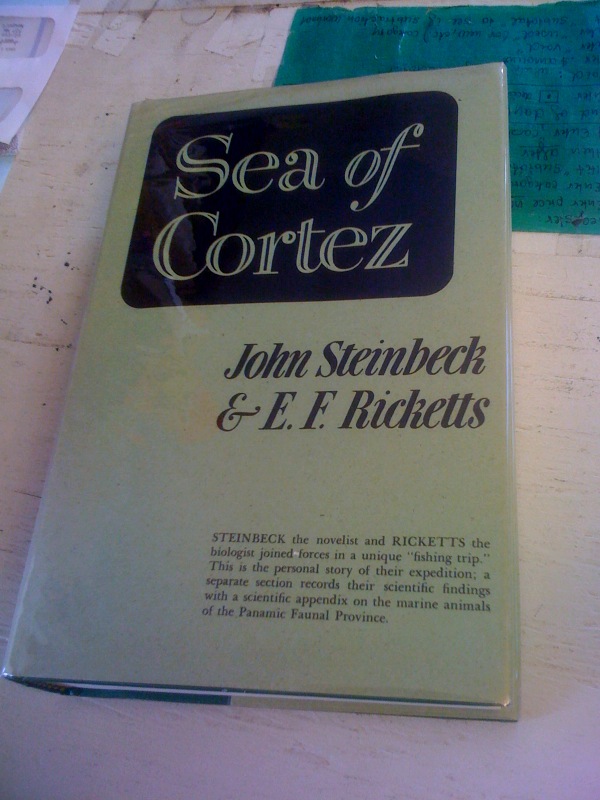 You can clearly see that Mah is a lucky bastard

You may remember me mentioning that Chris Mah scored an original original hard cover copy of the  Sea of Cortez detailing John Steinbeck’s and Ed Ricketts’ journeys on the Western Flyer. Since that day in Newport when Chris purchased the single copy and I of course went empty handed, I have thought of that illustrious hard covered chronicle.

Many of you might not notice the subtle distinction here.  In 1940, Steinbeck went on a voyage around the Gulf of California with Ricketts. Upon their return, they published Sea of Cortez: A Leisurely Journal of Travel and Research, which was one part Steinbeck’s journal from the expedition and one part Ricketts’ species catalogue (although Rickett’s did write parts of the narrative). When Ricketts passed in 1948, Steinbeck removed Ricketts’ species inventory from the book and republished it as the The Log from the Sea of Cortez. Steinbeck added to it a eulogy to his departed friend.

Now it is very hard to come by a copy of the Sea of Cortez as it did rather poorly in sales after the original printing and I think it has rarely been printed.  I did just find that a soft cover printing came out in July of this year.  However, a genuine hardcover will easily set you back $300-$900. See also the listings at Albiris. If the copy is inscribed by John Steinbeck to….I don’t know…noted Australian novelist Ruth Park or Emilio “Indio” Fernandez who collaborated with Steinbeck to direct the Mexican adaptation of the The Pearl “La Perla”, you are looking at an easy $10,000.

On the other hand, The Log from the Sea of Cortez is still being published and easily acquired for about $10, although a first edition will set you back a couple hundred.

Above you can clearly see that Dr. Mah’s copy is the original and in great condition.  Let me also go on record and say that his copy also cost considerably less than market value. Chris (is he rubbing it in?) sent an email today bringing this copy to my attention which has to be my favorite one yet.  Too bad I don’t have the $20,000.

This copy is inscribed in pencil by Ed Ricketts to his wife Alice Campbell: “To Alice from Ed. October 31, 1947. For remembering a belt that looks like a wood carving, ‘for us a measure of continuance.‘” Enclosed is the marriage certificate (#148484) of Alice and Ed signed by a justice of the peace in Las Vegas, with a vintage photograph of Ricketts, (5″ x 7″), black and white, with the original negative

3 Replies to “Sea of Cortez”