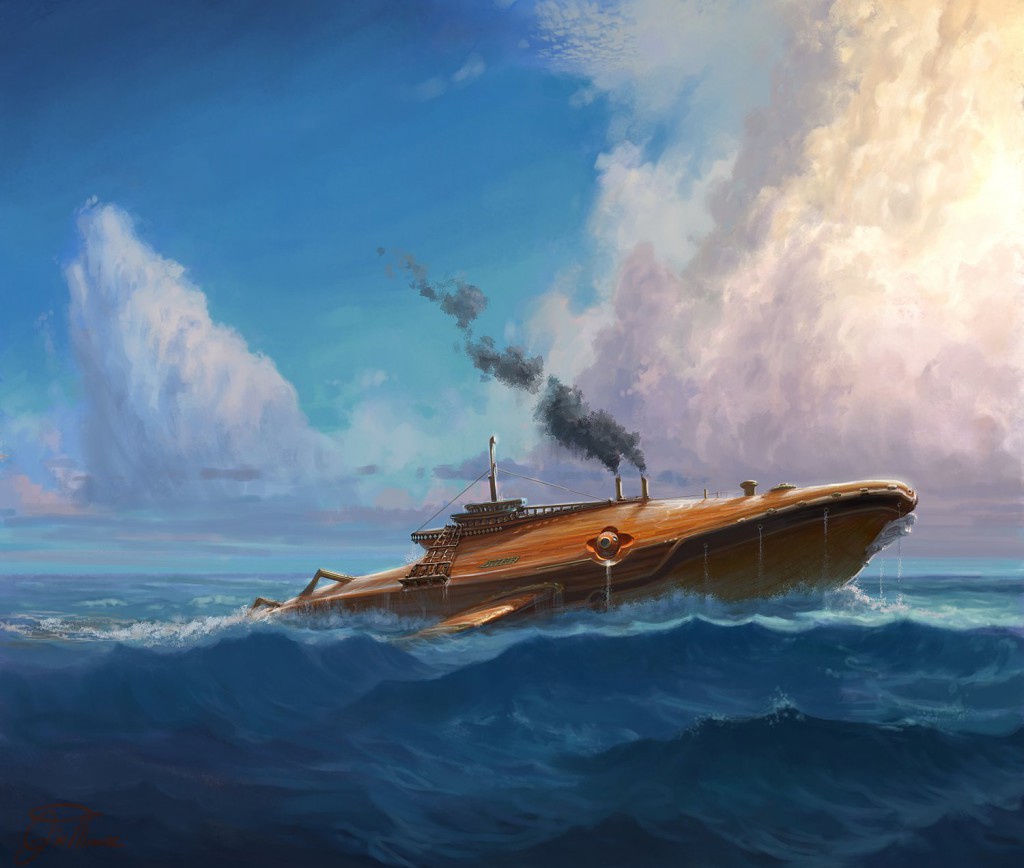 Jim Moore is a bay area concept artist working in the games industry. I became familiar with is artwork when Jim won the Scion Artist Intersection Contest grand prize at Kongregate. He won with the his amazing illustration Whale Sub (visit link for full resolution image).  Being both a fan of steampunk art and nautical themed art, I asked Jim if we could post this excellent piece here.  Jim graciously accepted and further provided the commentary before.  Head over to Jim’s Drawing Board to see more of his artwork.

Generally the intersection of art and science is lamentably brief at best, but this piece was a wonderful opportunity to combine a bit of mechanical engineering and a little applied marine biology. This piece originated as a simple whimsical ship design, but in the process of researching naval vessels I discovered the French and Spanish were experimenting with wooden hulled submarines as early as the mid 1800s. The problem was was that they were so bulkily designed they barely moved!

So putting on my victorian scientist hat, I took up the challenge of designing something using the tech of the time that would be a bit more effective. I naturally turned to the natural world for inspiration and scoured the seas for a suitable model. Although fish would seem to be a natural choice, they are generally built for either chasing things to eat or avoiding things that eat them. Neither speed nor maneuverability were high on my list, and the vertical orientation common to many tropical fish seemed ill suited to dealing with crashing surfacewaves. Mantas and sharks were another early target with a better shape, but their locomotion relies on either whip like movements to propel them, or using their flexible bodies as a control surface, neither of which seemed plausible given the limitations of the materials of the time.

Finally, it hit me that nature has already designed the perfect submarine- able to rest at the surface amongst the tides, with a slow but powerful propulsion system which could be replicated with rigid parts, and large enough to accommodate a small crew…the lovely and talented Balaenoptera musculus!

***UPDATE Prints and cards can be purchased here