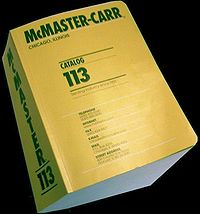 There she is in all of her big yellow beauty

During my scientific career I have learned many valuable lessons and garnered wisdom from my senior colleagues.  For example, when responding to the reviewers and the editor of your last journal submission, judiciously use the phrase “I respectfully request” when you wish to go against their recommendation.  When you have coauthors who will not respond with comments on a paper you need to submit urgently, simply state in an email that “I will assume if I do not hear back from you by X date that everything is fine and it will be fine to submit.”  Of course, my brain is also filled with heaps of science knowledge.  For example, the density of megafauna and macrofauna decreases more rapidly than meiofauna and bacteria with depth in the deep sea, i.e. as depth increases small organisms become more dominate.

One of the most useful pieces of knowledge I gained in my career I now share with you.  NOOB’s and shmoos use Home Depot, Ace, and Lowes.  Everything you need for any project is at McMaster-Carr, a supplier of Maintenance, Repair and Operations materials and supplies. They specialize in next day delivery and have distribution centers in Jersey, LA, Atlanta, and Cleveland. They are best known for their very large, yellow catalog, currently in the 113th edition, containing close to 500,000 products (also available on the website). No matter what the item you should need, assume they have it. They are the perfect source for random objects needed in DIY oceanography.

Need tools? How about precision tweezers or a heat gun? You need plastic mesh for a predator exclusion experiment or 300 um mesh for homemade sieves?  What about transparent PVC for sediment traps?  Polypropylene rope in any size, braid, and color?  They got it! You can never have enough cable ties!   What about a stainless steel carabiner capable of supporting 2100lbs? I’m drooling thinking of catalog page 1408 with the shackles. Of course they have faucets, machine screws, grounding cables, and multipurpose alloy steel. They also have jars, calipers, lab coats, and coffee machines for the well stocked scientist.

Hopefully someone at McMaster Carr will read this post and send us along a couple of T-shirts (XL) or hats because it would buy me major street cred with ship crews. Of course one of the coveted catalogues would also be nice.

4 Replies to “A Marine Scientist’s Best Friend: A Homage to McMaster Carr”