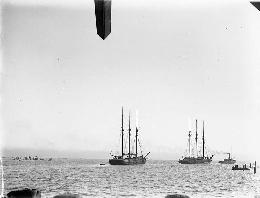 Its been a long time since I put up any original music. Here is one I got around to finishing tonight. Its a bit rough around the edges, especially the acoustic guitar dub over, but I was too lazy to redo it after a first run.

It may be hard to believe now – with ocean liners larger than my fair village of Beaufort, NC – but sailing vessels were the workhorses which transported goods around the world. Indeed, sailing ships are still making a comeback as a more environmentally friendly option for transporting wine in Europe.

Like any occupation on the sea, such routine work is fraught with danger! Safety wasn’t necessarily built in to the sailing vessels  of yore and modern safety equipment wasn’t even a fantasy 100+ years ago.

Kiss of a Cold Ocean - words and music by Kevin Z

For seven years he ran dead trees
Lumber for the gold rush cities
Down the coast from the Puget sound
Out into Pacific, California bound

Jack came on deck, pulled hard on the line
But the icy water made it hard to climb
The rigging swayed and water rushed in
Jack never even saw it coming

Awoke to kiss of a cold ocean
Down he sank like a drunken fish
The dark envelopes, full moon gets smaller
Tries to breathe but all he gets is water