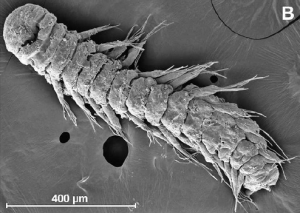 Say hello to my little fried… In fact, this guy is so small you might have missed if you didn’t use the right sieve mesh size! So small, that they are best viewed as a scanning electron micrograph (SEM) image like the one on the right. Ophryotrocha fabriae is a new polychaete annelid in the family Dorvilleidae, named after french researcher Marie-Claire Fabri. This little bugger comes from a hydrothermal vent at the Mid-Atlantic Ridge. Polychaetes are segmented worms with “leg-like” extensions called parapodia. These parapodia have a stiff, unique structure embedded in it called a cheata, meaning bristle (hence why they are often called bristleworms polychaete = many bristles).

What I really like about polychaetes though are the wicked eversible pharynges! You think that its mouth (the upper left end of the worm above) is just a little hole, but then BAM! booyah in your backside you just got punkd by eversible pharynx. Just so you have an idea of what is on the end of the pharynx here is an SEM of the jaws. 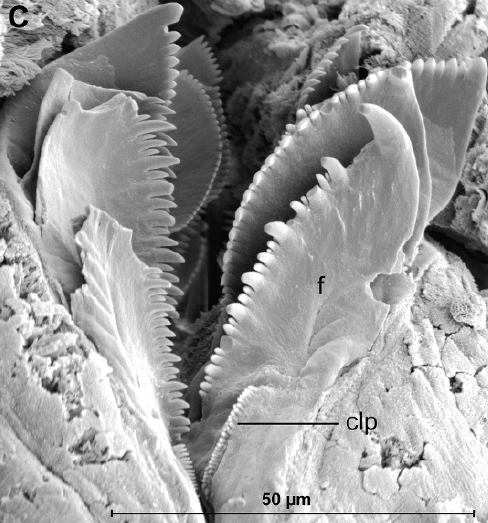 Here is a line drawing of the complete pharyngeal jaw of an average size specimen. 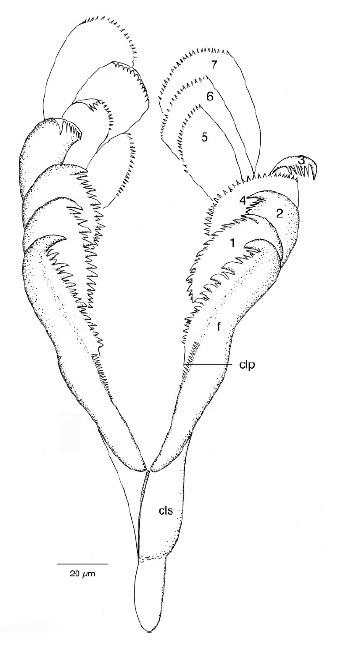 Seven denticles of death and destruction