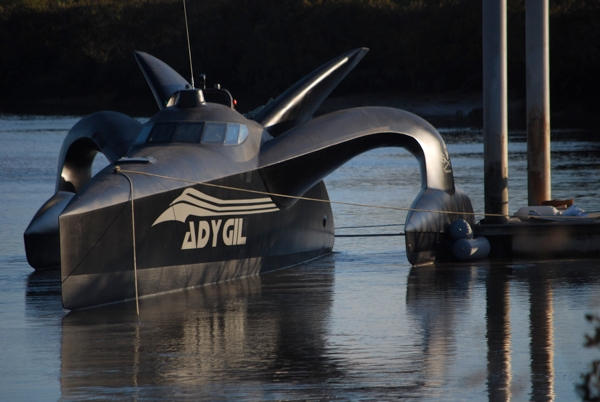 No, this isn’t the Knight Rider of the harbor. This batmobile of conservation is now the newest member of the  Sea Shepherd team, also known as Team Sink-A-Boat-For-Whales. From Sea Shepherd’s press office:

Due to its speed capabilities, up to 50 knots, Captain Paul Watson (Sea Shepherd President and Founder) intends to use the Ady Gil to intercept and physically block the harpoon ships from illegally slaughtering whales.

Says Captain Watson, “We’re very excited that the Ady Gil will be joining the Steve Irwin in Antarctica this campaign. With these two ships, we will mount the most ambitious and aggressive effort to date to obstruct the slaughter of the whales in the Southern Ocean.”

Says Chuck Swift, Deputy CEO in charge of ship’s operations, “The Ady Gil gives us the speed necessary to catch and stay with the Japanese whaling fleet. We are very optimistic that with these two ships, and some other surprises, we will shut down whaling in the Antarctic Whale Sanctuary.”

Thats your hard earned donor’s dollars work. Saving whales and stuff man. But let us take a moment to reflect on the manner in which Sea Shepherd operates the “normal” ship they already mismanage.

Now, it is easy to hate on Sea Shepherd but it is important to constantly remind the philanthropic public how bad an organization this is. They are systematically removing valuable conservation dollars from organizations that might actually make a difference. Their incompetence knows no bounds, yet they continue to receive donations.

Take for example the above video. There are certain rules that one must abide when working at sea, especially in the Southern Ocean with water temperatures not quite in the summer Jamaican vacation range. Anyone with a captain’s license would know that. Oh wait, Paul Watson is not actually a commissioned captain, but is instead a liar, bullies critics with bogus legal action, mismanages donors funds, hinders real progress in conservation, exploits whale deaths for fame and fortune, has little to no respect in the conservation community, and seriously endangers the lives of other people in one of the most dangerous working environments!

So for any novice wannabe self-commissioned ship captains out there, we here at Deep Sea News would like to offer a little guidance. This is DSN’s 7 Simple Rules for Marine Conservation Expedition Safety

We hope you all will have a fun, safe marine conservation expedition this Antarctic summer season! And remember, if you follow our 7 Simple Rules, you might actually save a whale!

(Disclaimer: Saving whales does not stop actually the practice of whaling, it only makes you feel good about yourself and look heroic in front of a camera. To save whales you have to actually interact with government and industry officials to enact rules and legislature, change hearts and minds, have a decent enough argument that sways people, etc. It is not easy, that is why hundreds of marine scientists around the world work hard on this problem EVERY DAY.)