This is been a pet project of mine for sometime along with why the giant isopod isn’t the size of two shoes instead of one, why the giant squid only reaches a measly half ton, and why snails are not the size of trashcans?  Along with pet projects come pet hypotheses.  For the blue whale, I considered that maybe there were constraints on the heart and circulatory system.  Consider that a blue whale’s heart is size of Volkswagen Beetle and must pump blood over 100 feet.  Over the length of the whale blood passes through a set of tubes encountering friction along the walls of arteries and vessels, meeting resistance in capillaries, and the splitting of viscous liquid at junctions.  A whole field developed, fluid dynamics, to deal with the complexities of such problems, but to simply it means a lot of work for a pump.  Think also about how municipal water supplies are arranged.  There are multiple pumping stations throughout a municipality not just an increasingly large pump at the center.  This is because pumps become increasing inefficient at moving liquids over greater and greater distances, i.e. a satellite pump is needed to overcome the forces of friction in a tube or pipe.  Maybe the whale is a big as it can be for its pump, i.e. the heart, to efficiently drive blood to the whale ends.  Maybe the whale needs a second pump?

As speculative as my first idea, I also considered another.  Perhaps there is something about the amount of food a blue whale requires?  Can the density of krill limit blue whale size?  Consider krill aggregations typically occur in upwelling, and thus cold-water areas.  For a blue whale to feed it must be in cold water.  However, a blue whale cannot calf in cold water, as “little one” would not be able to thermoregulate, i.e. keep warm.  Thus, blue whales, like many other whales, move to warmer waters to calve.  The calves consume 100-150 gallons of mile a day and weaning takes place for about six months. This weaning period is considerably shorter than you would expect for a mammal this size predicted from the mass/weaning relationship of other mammals.  A female then must be in two places at once in order to feed and calve.  Perhaps this imposes a set of constraints on blue whale size?  Further increases in size push the mass/weaning constraint and require more fat reserves than a female could possibly store.

Goldbogen et al. propose another idea supported with a great deal more theory, mathematics, and data than my pint-driven conjectures above.  Rorqual whales feed by lunge-feeding, the process of enlarging the mouth and swallowing a large volume of prey laden water.  This is energetically very expensive as a open mouth serves a parachute increasing drag, not to mention carrying a massive engulfed mouth full of water.  The total engulfed volume is a function, or scales with, the size of the skull and mount.  A relationship is considered isometric if an increase in size comes with the same proportion increase in trait or characteristic measured, in this case engulfing volume.  The relationship is allometric if the rate of increase of the measure characteristic goes up or down with increased size, i.e. larger sizes do better or worse than smaller size per unit of body size.  For example, time of weaning versus mass discussed above is an allometric relationship for mammals. In the paper here, the authors find that in larger fin whales the skull and mouth cavities are larger than that predicted by size alone, i.e. allometric.   Bigger whales possess disproportionally larger mouths for the increase in engulfment capacity, pound for pound, of an individual.  This greater feeding capability is required for these larger whales. 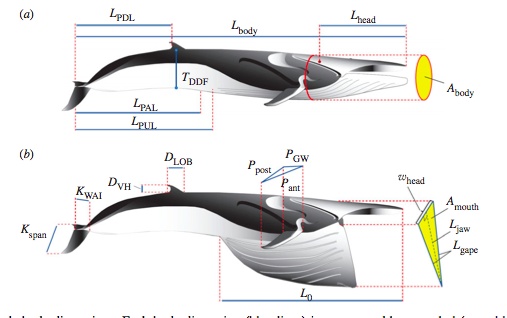 However, the authors find these allometric relationships do not go unchecked. First, bigger heads also often come with reduction of the anterior end as the whale “makes a choice” to invest energy in growth of the head or tail.  Second, this increased engulfment capacity may limit due to drag the depth in which larger whales can dive.  Given that krill descend at night this represent a considerable negative.  As the authors state even if whales are optimized for engulfment capacity with each lunge, the energy expended with eventually be greater than the energy gained. Thus, superwhales may be out the question unless whales can escape this evolutionary trajectory.  Which begs the question, will they still be whales?
Goldbogen, J., Potvin, J., & Shadwick, R. (2009). Skull and buccal cavity allometry increase mass-specific engulfment capacity in fin whales Proceedings of the Royal Society B: Biological Sciences DOI: 10.1098/rspb.2009.1680

9 Replies to “Why Are There No Super Whales?”