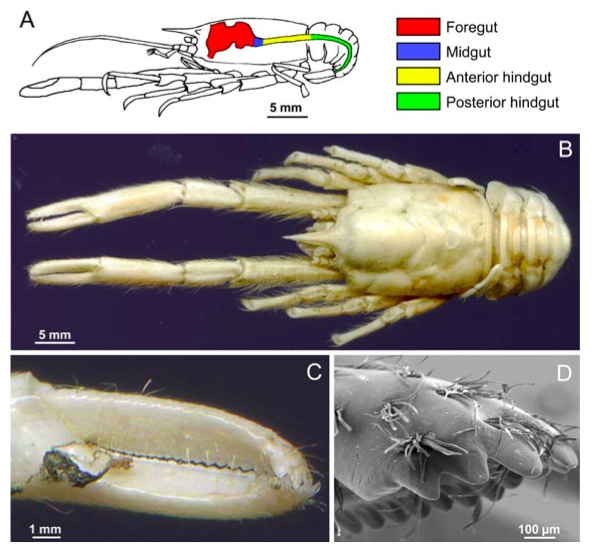 A deep-sea crab walks into a pub and asked, “Where’s the bar tender?”

Few deep-sea organisms rely on food originally from land.  Most deep-sea dwellers rely on  marine snow (detritus raining from the surface), large food falls like dead whales, or chemosynthetic pathways like those at hot vents and cold seeps.  This makes sense.  How much land plant material makes into the deep sea?

Apparently enough to make a living on.  When chunks of wood make it to the seafloor, they form specialized communities, i.e. wood-fall communities.  As the wood degrades, bacterial mats form, clams bore into it, and a host of other organisms come in to feed.  New work in Marine Biology suggests that the most dominant group after mollusks, the crustaceans, may also be feeding on the wood.  Researchers found wood in the gut of Munidopsis andamanica, a squat lobster commonly found at woodfalls.  Further work indicates that a resident gut microflora of bacteria and fungi exist that may aid in digesting wood fragments.  However to eat wood a species is going to need a robust digestive system.  Roughage, indeed!  Detailed anatomical analysis revealed that the mouthparts and gastric mill, i.e. stomach, were modified to be stout enough for a lumber diet.  The claw is also spoon shaped and thought to serve as a utensil to bring wood bits to the mouth.

M. andamanica thus represents another  pathway by which carbon cycles derived on land cycles into the deep sea.

From Hoyoux et al. Cross sections of material from the gut. If you remember anything from high school biology, you will know that those blue-green clumps of circles are plant xylem