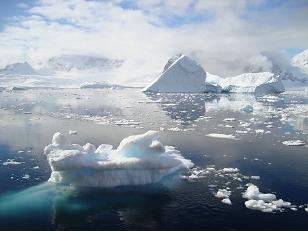 Andvord Bay and Barilari Bay are complete opposites. Andvord Bay was productive and teemed with life. Surface waters were thick with krill and phytoplankton. Whales surrounded the Palmer at all times, breaching and bubble-net feeding. The seafloor was strewn with kelp fragments and swarms of brittle stars. Rocks were covered with giant sponges and soft corals. Barilari Bay is comparatively quiet and barren. Surface waters are crystal clear. Seafloor life is much sparser and more fragile, consisting mostly of holothurians and small, sessile salps.

Glaciers likely play a role in this sharp contrast between the fjords. While Andvord Bay had only one large tributary glacier at the head of the fjord, Barilari Bay has six. Marine phytoplankton is averse to glacial runoff and as a result Barilari may have lower levels of primary productivity than fjords with fewer glaciers such as Andvord. Benthic communities in Barilari Bay are also likely to be strongly influenced by the glaciers, which spew carbon-lean rock flour onto the seafloor.

Andvord and Barilari are excellent sites to study the interaction between glaciers and the marine ecosystem. As our glaciologists fly to out to field sites, we will spend the next few days using CTD casts, water column samples, ROV transects, yo-yo cam images, and mega core samples to map patterns of primary productivity and benthic diversity in Barilari Bay.

One Reply to “Dispatches from Antarctica – Barilari Bay”