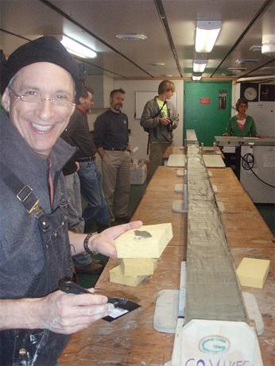 As LARISSA’s cryosphere team installs instruments on Larsen B tributary glaciers via helicopter, our ship-bound scientists gather data from the fjords.

For the quaternary and marine geosciences team, this means mud. Sediment covering the Antarctic continental shelf can be used to reconstruct a chronology of past sea-surface conditions such as temperature, primary productivity, ice shelf coverage, and proximity to silt-spewing glacier fronts. In certain places, layers of sediment have accumulated—one on top of the other, year after year—for millennia. The Palmer’s current position puts us within striking distance of one such area: Hugo Island Trough. Rough seas made yesterday’s attempted Kasten core a bust, but today we succeeded in extracting a 4.17-meter-long column of mud that represents nearly 12,000 years of sedimentation and extends our regional marine climate record 1-2 thousand years into the past. Although we currently cannot access sediments underlying the Larsen B Ice Shelf, we can use the Hugo Island Trough record to address similar questions: How often have glaciers on the Antarctic Peninsula grown outward onto the ocean to form ice shelves? Did these ice shelves gradually retreat or violently collapse, as did the Larsen A and B?

For the marine ecosystems team, connecting fjord ecology to ice-shelf collapse is a bit more challenging. Luckily, understanding the interaction between glaciers (both floating and terrestrial varieties) and the marine ecosystem is a major objective of LARISSA. In each fjord we visit, the connections between glacial meltwater, sedimentation, primary production, and benthic diversity play out on an accessible scale. As we hop from fjord to fjord over the next few days, we will opportunistically sample the seafloor and water column to begin sketching-out interactions between ice and life in this region. Here’s hoping that we also stumble across a cold seep.