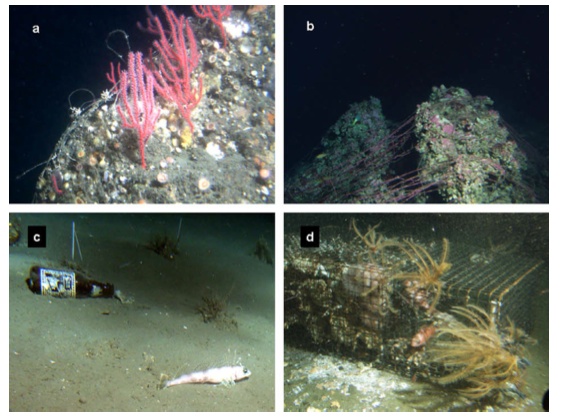 Monofilament fishing line is not what you expect to see on the deep ocean floor.  What would your response be if I told that enough occurs at depths over 1000 feet you can tally it?  And what if I told you it occurs frequently even in marine sanctuaries?  What if I told you it is not just fishing line but fishing poles, empty bait cans, longlines, nets, traps, fishing gear, fishing weights along with nonfishing items of beverage cans, bottles, construction debris, boxes, 55-gallon drums, artillery, anchors, chains, cables, lines, hub caps, tires, outboard motors, and let’s not forget the tank. That’s right a freaking tank.

On multiple surveys with a submersible, Watters and colleagues found all these items on the deep seafloor habitats off the California coast…often in marine sanctuaries.  In some localities, a piece of trash occurred every eight feet, just a little more than the height of most doors.

Although we did not observe a change in the overall distribution, types, or sources of debris found off central California between the 1990s and 2007, the amount of debris in- creased over time as traditional sites continued to be fished.

Is there good news?  A glimmer of hope in the findings?

Along the Big Sur coastline south of Monterey and absent of towns and ports, trash was virtually absent.

Sorry that was all I could find in the paper.