The world of patenting is quite different from the world of science. Weaving through the legalese and dry writing is horrendous at time. I am doing some research on patents to understand how knowledge of the deep-sea has permeated through society. One the examples I found is described below.

In 2000, one Cyrus Milanian of Florida was awarded a patent for his invention of “Re-enactment of a deep-sea voyage to the bottom of the sea”. In other words, he built an amusement ride intended for a freshwater lake in association with a hotel casino that was titanic themed. As you might guess the dream sunk, but he must have been determined to get credit due and sought out to patent his wild ride. Below are some of the schematics. The entire patent is available freely at the USPTO and Google Patents. 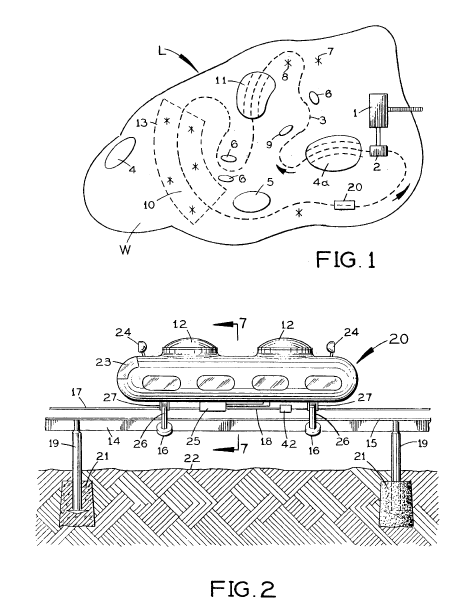 As you can see, Fig. 1 is the trackway through a lake or freshwater body. I wasn’t sure how he intended to replicate the deep-sea in a freshwater lake. I’m guessing Disney World-style props. Fig. 2 shows the view of the “conveyance”, or submarine. It is attached to a monorail that is out of sight for the passengers. Looks like it would have a cool ride!