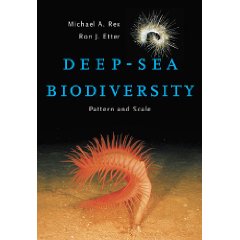 During my Ph.D., my advisors began drafting a book. I patiently awaited the tome on the deep sea biodiversity. My wait is no longer. Rex and Etter’s Deep-Sea Biodiversity: Pattern and Scale is finally here and the first book dedicated to synthesizing this subject. I received my copy last week and am quickly consuming every chapter. You can expect a full review soon. The early review’s of Rex and Etter’s book highlight its importance, novelty, and depth and from my initial reading I concur.

Rex and Etter’s great achievement will be an essential volume on any marine scientist’s bookshelf. It relates the great discovery of biodiversity patterns in the deep-sea floor to the physical and biological dynamics of the global ocean and its regions, and provides an important evolutionary and geological history perspective on the assembly of present day patterns of biodiversity.
–Jeffrey Levinton, Department of Ecology and Evolution, Stony Brook University

Rex and Etter offer a truly novel synthesis of an exciting and dynamic subject. They have done an exceptional job of compiling new data that captures the history, idea development, and current conceptual understanding of the abundance and diversity of the deep sea.
–Lisa A. Levin, Scripps Institution of Oceanography

Species diversity is considered briefly in the few books that address deep-sea biology but there is nothing to compare with the depth, insight and clarity of Deep-Sea Biodiversity. This book fills an important niche in deep-sea ecology.
–Paul A. Tyler, National Oceanography Centre, Southampton

I can say that if you have any interest in biodiversity or the deep sea this reasonably priced book should be a must for your shelf.