From Miya et al. 2010 Figure 1 - Representatives of the lophiiform suborders Lophioidei (A), Antennarioidei (B, C), Chaunacoidei (D), and Ogcocephaloidei (E)

My wife is from a very large family. Inevitably at in-law gatherings, I find myself whispering into my wife’s ear, “How are you related to that person?” Unfortunately, my wife has never provided me a nice family tree so I can see how these dozens of people fit together. Much is the same for the anglerfishes.  How are the Lophiodei related to the Antennariodei?  The Chunacoidei to the Ceratioidei?  The Tathicarpus to the Ogcocephaloidei?  How are the Wangdoodles related to the Hornswogglers, Snozzwangers, and the rotten, Vermicious Knids?  The answers to these questions are varied and riddled with uncertainty.

Somewhere in the history of fishes, the first spine in the dorsal fin took an evolutionary trip and found itself on tip of snout, becoming the lure that defines the anglerfishes.  Of course we cannot forget the other novel features of the anglerfishes: dwarf males, bioluminescence, and reproduction that often includes parasitism.  But how and when did the tiny free-swimming sperm packets that are anglerfish males evolve?  When did the lure start lighting up with a “come hither I want to eat you” message?  Unfortunately not knowing how these groups of anglerfish relate within the Lophiiformes, the order that contains all anglerfish, prevents us from knowing how all those wonderful anglerfish features evolved. 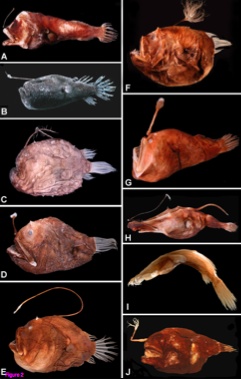 New open-access work my Miya et al. seeks to but the 325 living species, 68 genera, 18 families, and five suborders into their place in the evolutionary tree.   Miya’s work seeks to link together the flat goosefishes and monkfishes; the deep seafloor frogfishses, sea-mice, sea-toads, warty anglerfishes, and handfishes; the globular coffinfishes; the flattened deep-sea batfishes; and the deep-sea anglerfish distinctive in superbly tiny males that attach themselves to like little sexual parasites to females. 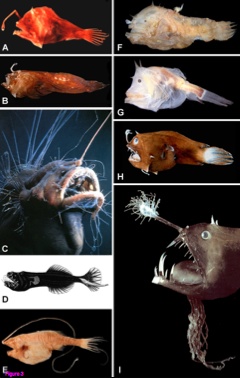 In just 30 million years (100-130 Myr) during the early to mid Cretaceous from a single ancestor, the anglerfishes evolved the set of novel features such as male dwarfism, bioluminescent lures, and unique reproductive modes.  These adaptations allowed anglerfish to quickly evolve and exploit the large and food-poor deep sea.  The deep-sea groups even evolved quicker than their shallow coastal cousins.  On this journey, males began to attach themselves, literally, to females, if only for a few lovely moments.  Afterwards and in some instances, males began to spend significantly more time with the lovely lady of their choice; attached to the female hip for longer periods of time but sometimes fending for themselves.  On the other hand some male anglerfish got wise.  They became full parasites and could not lead an independent existence.  Why swim and feed, run errands, do the laundry, clean house, if you don’t have to?

From Miya et al. 2010 Figure 10 Divergence times of the Lophiiformes

One Reply to “Family Gatherings and Free Swimming Sperm Packets”