Farewell Weddell Sea, Your Bubbling Clam Beds Will Have to Wait 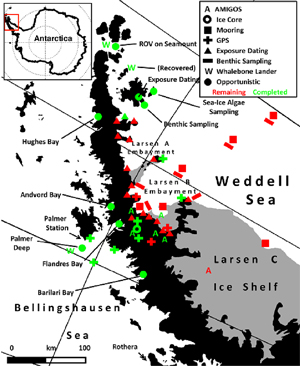 The first LARISSA cruise is over.  The Palmer has returned to port in Punta Arenas.  Gear is offloaded, samples are shipped, and most scientists have returned home to the United States, Australia, Belgium, and elsewhere.  Although we accomplished a number of our objectives (see map), we gave up trying to reach the Larsen B embayment after discovering that sea ice conditions in the Larsen A were unusually dangerous.  Plains of snow-covered pack ice gave way to a groaning hellscape of house-sized icebergs and car-sized “growlers”.  These low-lying iceberg fragments small enough to be easily overlooked but large enough to damage the hull and launch fifty-pound chunks of ice onto the back deck.  No one onboard had ever seen anything like it.  Some speculated that the now-destabilized Larsen B tributary glaciers must be hemorrhaging into the Weddell Sea at unprecedented rates to generate this kind of sea ice.  After southward progress slowed to one knot our captain shared his thoughts on the matter:  “We need to get out of here!”

It is with some disappointment that we retreat to our respective institutions, leaving behind a window into a world few have glimpsed.  Collapse of the Larsen B Ice Shelf blew the lid off a previously mysterious and inaccessible marine ecosystem that we were eager to study.  Floating Antarctic ice sheets cover a marine biome larger than the Russian taiga, yet prior to 2002 our view of this environment has been limited to a 50-centimeter-diameter borehole drilled through the Ross Ice Shelf in 1977.  (See footage of the Palmer passing a “small” calved ice-shelf fragment).  Incredibly, despite being 450 kilometers from open water, this drill site revealed that fish, swarms of crustaceans, and several new copepod species live under the Ross Ice Shelf.  What other species await description deep beneath Antarctic ice shelves?  How can these animals persist so far from a source of photosynthetic primary production?  LARISSA intended to find out.

We were particularly interested in the bubbling clam beds discovered in the Larsen B embayment.  While diatoms and strong currents observed under the Ross Ice Shelf suggest that photosynthetically-derived material transported from distant open waters supports sub-shelf consumers, initial surveys of the Larsen B embayment revealed that in situ chemosynthetic primary production may also contribute.  Video surveys conducted in 2005 of a glacial trough 100 kilometers from the former edge of the Larsen B Ice Shelf recorded bacterial mats and vesicomyid clams associated with seafloor methane vents known as “cold seeps.”  Similar-looking mats and symbiotic bacteria in vesicomyid gills are known from other areas to use chemical gradients (in the case of cold seeps, a methane-driven sulfate/sulfide gradient) rather than light to assemble biomass from simple inorganic constituents in a process called chemosynthesis.

Finding the methane source fueling these seeps, describing novel organisms the seeps support, and measuring how the seeps structured benthic diversity beneath the Larsen B Ice Shelf were major goals of LARISSA.  We would tackle this challenge from five distinct but complementary angles: 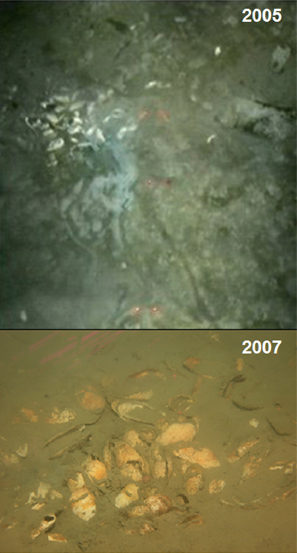 Living vesicomyid clams 100 km from the former edge of the Larsen B Ice Shelf, initially seen in 2005 (top, from Domack et al. 2005), and images of what may be the same clam bed now dead in 2007 (bottom, from Niemann et al. 2009). Although the image quality is poor, the trails in the 2005 image are characteristic of those made by living vesicomyids.

These projects will have to wait until the next LARISSA cruise in 2012, when ice conditions will hopefully be more amenable to ship transit.  But how much longer will remnants of the sub-shelf ecosystem persist?  In 2007, a second team briefly revisited the Larsen B clam bed but found only empty clam shells buried in “diatomaceous fluff.”  While it is possible they simply visited the wrong site—after all, empty vesicomyid shells typically vastly outnumber occupied ones at cold seeps—it may be that Larsen B seep communities are in a state of decline.  Authors of the paper reporting discovery of the Larsen B clam bed hypothesize that ice-shelf collapse and subsequent influx of photosynthetically-derived organic matter are ultimately detrimental to communities adapted to dark, food-limited conditions.  If this is true, then how many new species will disappear unnoticed as ice-shelf collapse propagates south along the Antarctic Peninsula?

The author would like to thank the LARISSA science team:  Chief Scientist Dr. Eugene Domack, and the extraordinarily capable, well-prepared, and good-natured marine ecosystems team of Dr. Michael McCormick, Dr. Maria Vernet, Dr. Craig Smith, Dr. Laura Grange, and Dr. Cindy Van Dover.  Special thanks to Raytheon marine technicians Ross Hein, Buzz Scott, Dan Powers, Mike Lewis, and Jeremy Irons for their assistance with the less-than-pleasant task of deploying whalebone moorings.  Thanks also to Captain Joe Borokowski III and the entire Edison Chouest Offshore group for their skill and superb professionalism in piloting and maintain the RVIB Nathaniel B. Palmer during her at times challenging two-month mission.  Finally, thanks to Deep-Sea News for hosting this cruise blog and readers for their interest and questions.

To close, some images and video from the Antarctic: