Isopods, you know them as those adorable little roly-poly bugs under rocks in the forest or the gigantic Bathynomus of the deep sea. They are also those cute and cuddly parasites in the gill chamber of shrimp too! Awww, How special! In a recent issue of JMBA-UK, Calado et al. describe how these fuzzy wittle darlings castrate their shrimpity hosts.

The isopod in question is the Argeiopsis inhacae, a member of the parasitic family of isopods – Bopyridae. They don’t start off as the lovely parasite “friend” of shrimp. The larvae begins life as a free swimmer until it finds a copepod to attach itself too, then metamorphoses into another larval stage and looks to buddy up with the nearest shrimp it can find. 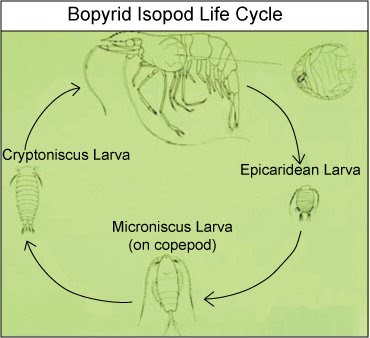 Calado et al. found that when pairing unparasitized males and females together, females laid perfectly fine clutches of eggs. However, when unparasitized males were paired with females containing the isopod, there were never any egg clutches laid. This is in spite of similar courtship behavior and no differences in moult patterns. Furthermore, parasitized adult female shrimp did not develop a key feature denoting fertile production, a bright green spot on the back that marks the presence of large yolky oocytes. It appears that this bopyrid isopod causes “reproductive death” in females Stenopus hisidus. Unfortunately, they never tested whether parasitized males can make viable offspring. It is still not known whether parasitism is sex-biased or appears as such because of the author’s limited sampling.

This short study is interesting because it is the first experimental study to nail down reproductive cessation due to the isopod parasite. What use is it to stop reproduction? One reason may be to divert the host’s resources away from reproduction, an energy expensive process. The isopod would ensure its survival and its continuance to leech off the shrimp. 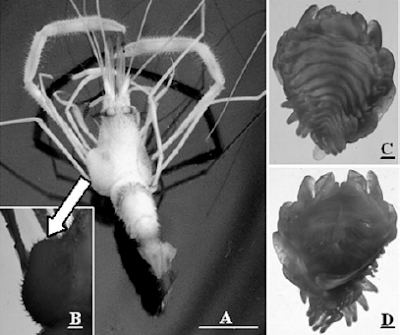 The isopod, Argeiopsis inhacae, forces the shrimp's carapace to bulge, as it grows inside the branchial chamber. Figure 2 from Calado et al. (2008).

One Reply to “Isopods Cause Reproductive Death in Shrimp”