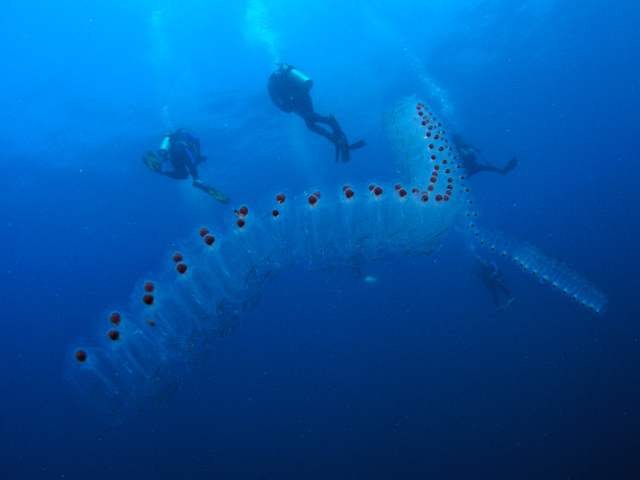 I was EXTREMELY shocked that my beloved urochordates were not included in the rekindling of the invertebrate wars. I am compelled to defend their honor by reposting this rousing defense, originally published on the Oyster’s Garter.  I’ve transferred my studies to the open ocean and no longer study benthic tunicates, but out in the mid-Pacific the mighty salp rules the waves. Bow before it.

When I somewhat belatedly caught up on the Great Invertebrate Wars, I was torn. Which was best, molluscs or echinoderms? On the one hand (as Jason pointed out), we are extremely fond of tasty bivalves here at the Oyster’s Garter. On the other hand, echinoderms frequently eat poop and barf up their guts, which is a giant plus in my book.

But I do not need to fit myself into this narrow phyla dichotomy! I am a maverick, a unique and special snowflake, and I walk boldly alone to proclaim from the very electronic rooftops that UROCHORDATA IS THE BEST PHYLA IN ALL THE OCEAN.

Why? Because they are my study organism and I plan to spend the summer doing unspeakable things to them in tiny torture chambers. But if that isn’t enough, here is a conveniently numbered list that will make the Deep Sea News lads throw their puny molluscs across the room in jealousy and perhaps gently weep into their extremely expensive deep-sea cores (but I hope that CR McClain will not weep too much because he gave me a kick-ass tour of MBARI and bought me tasty squid for lunch and is awesome).

But first, Meet the Urochordata.

What has no backbone yet is a chordate? That’s right, your friendly neighborhood tunicate. (For the purposes of this little essay, a tunicate refers to a member of the phylum Urochordata.) As adults, tunicates are basically a soft sack for filtering water, surrounded by the tough tunic that gives them their name. They suck the water in through an intake siphon, catch the nummy bits in a mucousy net, and squirt the water out an excurrent siphon with nary a backbone in sight. But as larvae, they have all the critical chordate characteristics (a notochord, a dorsal nerve cord, pharyngeal slits, and a post-anal tail, in case you were wondering) and swim about just like a little fishy until they undergo metamorphosis into the invertebrate-like adult form.

Being a benthic lass, I have a bias towards the ascidians, which are the group of tunicates that live stuck to hard surfaces like rocks and docks. However, there are some extremely kickass tunicates that are strictly pelagic, which is to say they spend their entire lives floating about in the open sea. I have selected four reasons why tunicates are best.

Sure, they look all slimy and featureless, but tunicates are our closest relative in the invertebrate world. Most chordates can only live as solitary individuals (booooring) but tunicates also live as colonies of genetically identical clones (no other chordate can do that!).

Colonial tunicates pretty much have chordate superpowers. They can absorb and regenerate organs or even entire clones without batting an eye. If broken into fragments, they can reattach, grow, and thrive. Creepily, if a colony comes into contact with either its parent or sibling colony, the colonies will fuse and become one uber-colony.

Creepiest of all, the golden star tunicate (Botryllus schlosseri), which I have been working on, has parasitic stem cells. When two colonies fuse, the stem cells battle it out for who gets to control the genes that go into reproduction. Whoever wins gets to pass its genome to the next generation. Whoever loses…well, that’s natural selection.

2. Tunicates thrive where puny molluscs and echinoderms fear to tread. All shall look upon them and despair!

Tunicates laugh in the face of pollution. If you go to the most godforsaken stinkiest backwater harbor, you’ll probably find tunicates growing there. Many species eat copper antifouling paint for breakfast and wash it down with some tasty fecal bacteria. Harbor-dwelling tunicates travel all over the world on the bottoms of boats and then happily establish themselves in a new home. That’s why most temperate harbors all over the world have similar tunicate species – they’ve managed to migrate. Not bad for something that can’t move on its own.

Tunicates can also kick ass in tropical systems. One Caribbean species, Trididemnum solidum, is overgrowing apparently healthy corals. Trididemnum is the mack truck of tunicates, combining incredibly toxic poisons with spiny spicules to ward off predation. And it’s not even dependent on outside food – it has a symbiotic algae that makes yummy sugars right in its cells.

3. Invasive tunicates r in ur aquaculture, killin ur molluscs.

But being a tunicate is not just about chowing down on plankton and kicking molluscan hiney. The pelagic tunicates are waging a mighty battle against climate change by exporting all the carbon they can. Salps are colonial pelagic tunicates that grow truly enormous, and are famous for their exceptionally dense poop (previously featured on TOG). They are carbon sequestration machines, raining down poop to the depths, where (pathetically scavenging) molluscs and echinoderms can get at it.

Larvaceans are another mighty carbon warrior. They build a mucous house around themselves to catch particles of food. When the house gets clogged, the larvacean casts it off, and it also sinks down to the depths with a load of carbon. Larvacean houses are another critical source of food to the molluscs and echinoderms (and worms and giant protists and everything else) in the deep sea.

This was just a tiny selection to establish the New Tunicate Order. I didn’t even get into bioluminescence (the doliolids!) or predatory ascidians or even much into glorious tunicate toxicity. But if any of those…other…phyla dare to raise a tentacle or tube foot in protest, the awesomeness will rain down one hundred fold!