What looks like a worm, is completely symmetrical in cross-section, and in the words of  Dr. Peter Holland:

“It has no mouth, no gut, no brain and no nerve cord. It doesn’t have a left or right side or a top or bottom – we can’t even tell which end is the front!” (quoted from Physorg)

Its the one and only Buddenbrockia plumatellae! Buddebrockia is a myxozoan, a strange group of typically amoeboid parasites. This little fellow in particular is a parasite of bryozoans (see picture below, exiting a bryozoan zooid). Myxozoans have strange potentially-nematocyst-looking cells called polar capsules. Some researchers considered Myxozoa to be reduced cnidarians, though with the discovery of the worm-like Buddenbrockia plumatellae and Hox genes support a bilateria origin. Confused or just wierded out? 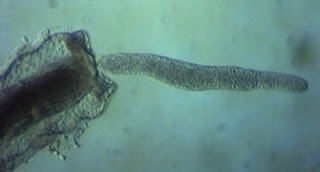 A study published in 2007 in Science answers the paradox of Buddenbrockia with a 50 gene (thats 31,092 amino acid alignments) analysis confirming that 97% of the time Buddebrockia plumatellae clusters with medusozoan cnidarians. The authors conclude:

“This active muscular worm increases the known diversity in cnidarian body plans and demonstrates that a muscular, worm-like form can evolve in the absence of overt bilateral symmetry.”

Cnidarians really offer an amazing evolutionary system to study how body form is controlled at the genetic level. For instance, if these are really cnidarians, albeit highly derived parasitic forms, how can there be this amazing diversity of body form from medusoid, polypoid, amoeboid, worm-like, and planular larvae all within a single phylum?

2 Replies to “Say Hello to My Little Friend”