Peter Etnoyer is a deep sea coral habitat specialist with NOAA’s National Center for Coastal Ocean Science (NCCOS) in Charleston, SC. He returns to Deep Sea News to deliver this important report on an exciting new development in deep sea science. The journal Oceanography published a new full-color thematic issue online, devoted to understanding seamounts, the ‘Mountains in the Sea’.

The Largest Habitats on Earth by Peter J. Etnoyer, PhD 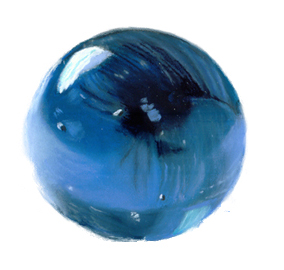 One of the most important moments for the environmental movement was a 70’s era photograph of Earth from space. My generation grew up with this image on the cover of Life, as a bedroom poster, even on television. We called it the Big Blue Marble, and ever since that time, many of us dedicated our lives to preserving this Ocean planet.

One of the ongoing challenges since that time has been to connect our human behavior to that Big Blue Marble, to understand the impact of global fisheries, or CO2 emissions, and to weigh these impacts against Earth’s natural biogeochemical cycles. The hardest part about this, for me, has been simply to wrap my head around the idea of the true size and extent of Earth. It’s huge! The planet seems too big to comprehend.

One way ecologists have gone about the task of knowing our planet is to subset the Earth into its constituent habitats, forests, deserts, tundra, and coral reefs, in order to understand the contribution of each to global diversity and biogeochemistry. Earth’s ‘biomes’ are major life zones characterized by similar biotic and physical characteristics (Woodward, 2003).

So, did you ever wonder, “what is the largest habitat on Earth?” Terrestrial biogeographers have had this pretty well figured out since Udvardy, 1975. According to that UNEP report, warm deserts (24.2 x 106 sq. km.) and tundra (22.0 x 106 sq. km.) are the two predominant terrestrial ecosystems on the planet. It’s ironic, because deserts and tundra are probably among the most neglected habitats on the planet and they represent extreme conditions.

Ocean lovers among us will quickly recognize that the largest habitats on Earth are inevitably marine, because Oceans cover nearly 70% of Earth’s surface. Udvardy’s (1975) UNEP report had tallied less than one-third of the planet. Ocean lovers will also recognize that ocean is not one large homogenous volume of seawater, either. The ocean has zones, like photic and aphotic zones, upwelling and downwelling zones, and different types of features, like estuaries and mid-ocean ridges. The funny thing is, there was no easy list of marine biomes for us to rank these by until Oceanography published a recent volume on seamounts called Mountains in the Sea. 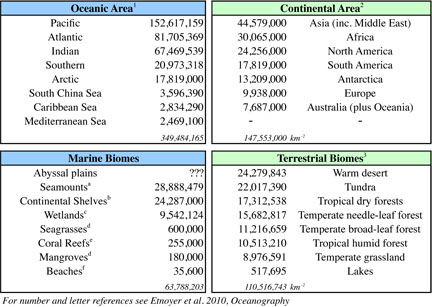 I had the pleasure of assembling this list, and it turns out, much to my surprise, that the “seamount biome” is among the largest habitats on Earth, second only to the abyssal plain. Taken together, seamounts occupy an area on Earth roughly equivalent to the continent of Africa (Etnoyer et al 2010). This is surprising because the prevailing conception, even among those of us who study seamounts, is that seamounts are remote, isolated features.

Similar to terrestrial biomes, the most prevalent habitats in the Ocean are among the most neglected and extreme. Deserts, tundra, abyssal plains, and seamounts- it’s like the ‘new normal’. We, the people, are living in and studying relatively rare habitat types, like wetlands and beaches, while surrounded by mysterious and abundant seamounts most of us will never see.

The Oceanography volume is remarkable for others reasons, too. The term “seamount” has been redefined as a feature 100 m or more that may or may not penetrate the sea surface (Staudigel et al 2010). By this definition, Hawaiian islands are seamounts that break the surface. The latest census of seamount features estimates over 45,000 large (> 1000 m) submerged seamounts worldwide (Wessel et al 2010). Seamounts are now recognized as altering flows in the upper mantle and interrupting the movement tectonic plates.

Think about that next time you see a rocket blasting off to explore outer space. If we’re looking for alien life forms, or new places to explore, we’ll find them right here, in the unknown oceans.

Udvardy, MDF. 1975. A classification of the biogeographic provinces of the world. International Union for the Conservation of Nature and Natural Resources (IUCN) Occasional Paper No. 18. Morges, Switzerland. 48 pp.

The article above is a personal view, and does not necessarily reflect the opinion or policies of NOAA.

4 Replies to “Guest Post: The Largest Habitats on Earth”