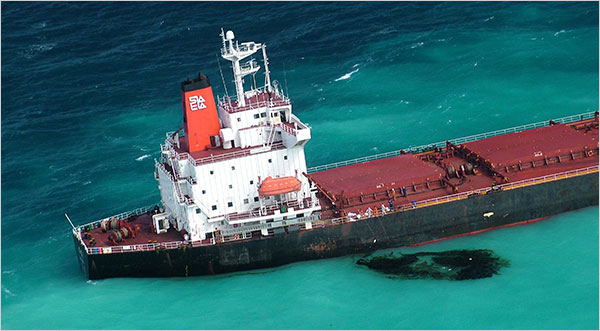 Photo from Queensland Government. Some of the 1,075 tons of fuel carried by the Chinese freighter Shen Neng 1 could be seen leaking from its tanks on Sunday.

In part two of unintended series on oil…

Unless you live under an oil covered rock you probably already know that a Chinese ship carrying 65,000 tons of coal ran aground off Australia near the Great Barrier Reef.  A bit more problematic is the 950 tons of oil on board leaking onto the surround reef.  This has the potential to be the greatest environmental disaster, outside of those pesky cane toads, in Australian history.

Why are ships allowed so close to the reef?  $60 billion dollars.  Mwahahahahahaah.  From the Guardian,

In recent years, its pristine waters, in theory protected by the statutes of the Great Barrier Reef Marine Park, have become known as the “coal highway”, a busy thoroughfare for foreign-owned bulk carriers bound for Asia. Laden with coal and fuel oil from Australia, thousands of ships, such as the Chinese-owned Shen Neng 1, which ran aground off the country’s eastern seaboard on Saturday, continue to jeopardise the largest marine conservation site in the world….”This is the $60bn-a-year, largely foreign-owned coal industry that is making a coal highway out of the Great Barrier Reef,” said Bob Brown, leader of the Australian Greens party.

In a strange display behavior, the Australian prime minister is all bullshit that this could have happened.

“From where I sit, it is outrageous that any vessel could find itself 12 kilometers off course, it seems, in the Great Barrier Reef,” he told Australian news organizations after the flyover

Or LOL Catspeak “O NOS! HOO IZ SPILLIN OIL ON MAH REEF”  Gee I wonder, who has the ultimate power in Australia to control rights to its territorial waters?

Latest update is that response crews hope to start transferring the 950 tons of  heavy engine oil from the stranded ship onto another ship in the next 1-2 days.

One Reply to “Oil: Not just for autos but coral reefs as well”