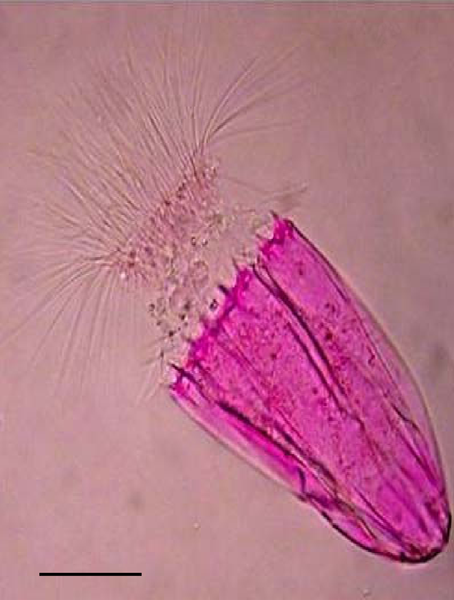 All three of these quotes equally appy to a group of invertebrates gone unnoticed. Unless you frequent cocktail parties with hoards of invertebrate biologist (make sure you bring rouge), it is unlikely you know of the phylum Loricifera.

You also probably don’t know the reproductive cycle of Loriciferans is just plain freaky. Larvae can develop multiple larvae inside of them.  How much and what type of food a Loriciferan consumes determines its entire life cycle. I’m sorry little Jimmy you like mashed bananas, you’re a hermaphrodite!  In one species of Loricifera the juveniles, possessing a humongous ovary, can be larger than the adults.  Despite these reproductive pathways that makes any good Southern Baptist blush, Loricerfans have not “lived badly.”

Don’t blame yourself for not noticing Loriciferans.  The odds are stacked against you.  Kristensen only described the first Loricifera species in 1983 and in the 27 years since only 19 more were added.  You would not encounter one on a walk.  O’ scary Loricifera in the woods! You would not even see one if you did.  O’ scary but really small Loricifera in the woods?!  The 20 species, ranging in size from 1 millimeter down to 1/10 of millimeter, dwell in the tiny spaces between individual grains of sediments in the oceans.

A new study by Roberto Danovaro and colleagues in Italy and Denmark might just be the coolest scientific finding of the decade.  Justifiably, Loriciferans finally see the spotlight.  Why?

Danovaro et al. adds three more new species to the list of Loricifera.  If Loriciferans were mammals—they’re not but indulge me—then this would be the equivalent of finding  ~800 new species of mammal and bringing the total to ~6200.  The biodiversity of known Loriciferans just increased by 15%!

Despite being relatively rare and unknown from every other location in the ocean, Danovaro’s group reports upwards of 700 individuals in an area the size of small coffee table from the deep Mediterranean Ocean. I’ve sorted many deep-sea mud samples.  My running life-list of Loriciferans? Zero

Perhaps the most important finding is the scientists discovered these new Loriciferans in an area devoid of oxygen. They represent the first multicellular animals known to science to exist in anoxic conditions. Remember learning that oxygen is the great provider of complex life in high school biology?  Forget it.  Apparently, oxygen is unnecessary. These three new species do not even have mitochondria! What will other metazoans think?  Much like Tsunetomo advised the samurai, Loriciferans should carry rouge to achieve a rosy complexion because its not coming through red oxygenated hemoglobin.

Finally, I love this study for the remarkable lengths the authors traverse to provide overwhelming evidence for these important and novel findings.  Three oceanographic expeditions were spent to provide sound evidence of Loriciferans occurring in this unusual deep-sea location.  The authors utilized so many methods, including, rearing and incubation, to ensure these species were actually thriving in anoxic conditions that I actually lost count.  Last they utilized electron microscopy to uncover the lack of mitochondria and the presences of organelles for anaerobic metabolism. Danovaro’s group should also be commended for the insight to make the publish the paper in an open-access journal.

Like so many other recent deep-sea discoveries, Danovaro et al’s work continues to challenge our understanding of the conditions life requires for existence.  We are the sailors unable to get off the ship in the storm, prepared for the next discovery.