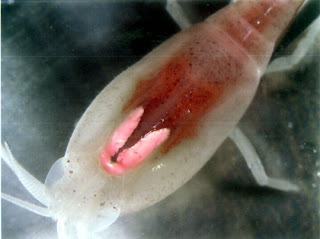 *Not to be confused with the hit song by Survivor.

The vent shrimp Rimicaris exoculata (literally the Rift-shrimp deprived of eyes) swarms hydrothermal chimneys, with temperatures reaching over 350 C, en masse in the darkness of the deep sea. It has a certain peculiarity in that its eyes are completely absent yet there is a high concentration of the visual pigment, rhodopsin, in a dorsal “eyespot” beneath a transparent cuticle of the carapace (see shiny pink parts on image to left). Other more closely related vent shrimp do retain eyes, though they tend to be reduced and fused together. The anatomy of this eye has been studied in detail and several authors have hypothesized that it can detect “black-body” radiation, which is thermal radiation given off by the vents at around 350C. 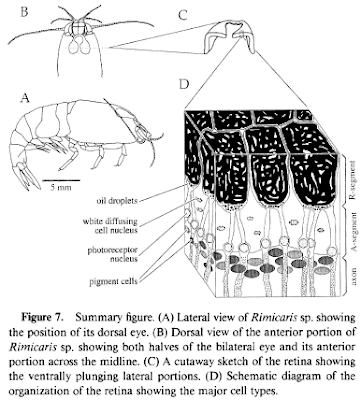 Pelli & Chamberlain (1989) actually calculated whether or not Rimicaris could see this black-body radiation given the concentration of rhodopsin it has and the radiation properties of a 350 C hydrothermal vent. Using some biophysics and math magic, their conclusion is:

“… 50 pmol of rhodopsin present in the shrimp eye will yield approximately 1,600 thermal isomerizations per second. To detect the 350C vent, the shrimp would have to discriminate a signal-plus-noise isomerization rate of 1,800+1,600=3,400 per second from a noise-alone rate of 1,600 per second. A brief integration time of only 20ms would yield a decision variable with a signal-to-noise ratio of 6.4.[…] This would allow the shrimp to detect correctly the lethal hot water 99.9% of the time, and mistake ambient for hot water only 2% of the time.”

They determined that the shrimp’s peak wavelength was around 500nm, pointing out that the luminance of the vent is just below the threshold for a dark-adapted human. Nuckley et al. (1996) concluded from their examination of retina:

“The structural changes observed in the retina of Rimicaris sp. might be expected in an animal that is adapting to a dim-light environment… and are consistent with the changes we have observed in other hydrothermal vent shrimp. In general, an animal’s eye continues to enlarge as the environment becomes dimmer and dimmer until the “quit point” is reached where exploitation of light in the environment becomes impossible […]. In animals that adapt to the darkness beyond the quit point, the eye shrinks or disappears altogether.”

Chamberlain (2000) reviewed vision in vent shrimp. He compared the image-forming eye of shallow water shrimp to the photodetection eye of vent shrimp, as well as comparing juvenile to adult vent shrimp. A very interesting insight was that

Another interesting point is that Rimicaris farms and harvests sulfide-loving bacteria under its carapace. The bacteria occur where the temperatures are hot because that is where their energy source, hydrogen sulfide, is coming out from the vent. Therefore, the shrimp would have to make periodic excursions into hot water to feed its bacterial farm. I have actually seen some shrimp with what looks like burnt off tails. These species do not have the dorsal eyespot that Rimicaris does.