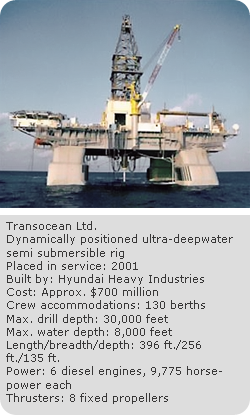 Photo from the gCaptain Blog

I spent a summer as an undergraduate in Port Fourchon, Louisiana conducting field work. Some of my fondest memories surround that summer I spent in 130% humidity and 130˚ heat. Like many others, I’ve intently watched a human tragedy take its tole and a potential environmental diaster unfold. Below I provide a timeline of events.

Tuesday, April 20th-A Transocean rig called the Deepwater Horizon explodes and catches fire, approximately 42 miles Southeast of Venice, Louisiana, while finishing a well for British Petroleum. U.S. Coast Guard District Eight command center receives report at approximately 10 p.m. Of the 126 people on board at the time of the explosion, 115 crewmembers were accounted for. Of these 115, 17 were medevaced from the scene. Search begins for missing 11.

Wednesday, April 21st-Officials state environmental damage will be minimal. BP mobilizes an armada of ships and aircraft to contain the oil slick.

Thursday, April 22nd-The fire rages. Mid-morning Thursday a second explosion occurs causing the rig to sink. 700,000 gallons of diesel are enclosed tanks inside the pontoons at the time of the initial explosion. Unclear if diesel remains contained.

Friday, April 23rd-Coast Guard state no oil appears to be escaping from the well head on the ocean floor. The U.S. Coast Guard suspends its search for the 11 missing crewmembers at approximately 5 p.m. ending a three day search that included 28 air and ocean craft and covered ~5,375 square miles.

Saturday, April 24th-With remotely operated vehicles, officials discover the oil is escaping from two leaks in a drilling pipe about 5,000 feet below the surface.  Leaks appear to be releasing 1,000 barrels a day.

Sunday, April 25-The oil slick covering 600 square miles and spreading north, is about 70 miles south of the Mississippi and Alabama coastline.

Monday, April 26-The oil slick stretches 80 miles across the Gulf and is 36 miles southeast of Louisiana. Cleanup crews set up booms to block as much oil as possible from coming ashore.  Remote operative vehicles are full day into operations to sea oil well on ocean floor. Reuters- “The leaking well, 5,000 feet under the ocean surface off Louisiana’s coast, has created an oil sheen and emulsified crude slick with a circumference of about 600 miles, covering about 28,600 square miles (74,070 sq. km), the Coast Guard said on Tuesday. That’s slightly bigger than the U.S. state of West Virginia….The spill, however, is not comparable with the infamous Exxon Valdez disaster, which spilled about 11 million gallons (50 million liters) of oil into the Prince William Sound in Alaska when it ran aground in 1989. BP’s well is spewing about 42,000 gallons (190,900 liters) of oil a day into the ocean, the Coast Guard estimates.”

Tuesday, April 27-Officials consider setting fire to the slick, which has grown to 100 miles across. The fast-moving spill is about 20 miles off the Louisiana coast. A controlled burn of the surface oil is now considered. Homeland Security Secretary Janet Napolitano and Interior Secretary Ken Salazar say they are expanding the government’s investigation of the explosion that caused the disaster. Obama administration officials meet with top executives of BP. Governor Bobby Jindal requests tCoast Guard set up protective booms around several wildlife refuges.

Wednesday, April 28-The slick nears to 20 miles east of the mouth of the Mississippi River. British Petroleum states a controlled test to burn the leaking oil was successful late Wednesday afternoon. NOAA-“Workers finish a containment chamber portion of a collection doom that will collect oil escaping from the well at the seafloor. The first rig to drill a relief well arrives on site and will commence drilling on Friday but will not be ready for several months. Good weather allows for both skimming operations and aggressive aerial application of dispersants – over 50,000 gallons of dispersant have been applied to the surface oil in the last two days.”  The U.S. Coast Guard move ahead with a plan to burn off some of the crude from the slick. Mineral Management Service calls off luncheon “to present its annual award for exemplary safety and environmental management.”  BP among list of finalists.

Thursday, April 29th-Louisiana Gov. Bobby Jindal declares a state of emergency and the federal government sends in skimmers and booms to prevent environmental damage. At morning, the spill is roughly 16 miles off the Louisiana coast and stretches across a 600-mile area. Updated models indicate the the slick may reach parts of the coast by later today or early Friday.  President Obama designates the spill of national significance allowing personnel and equipment from other regions to be more easily mobilized and transfered to the scene.  BBC-President Barack Obama said BP was “ultimately responsible for funding… clean-up operations”. he US homeland security secretary, Janet Napolitano, is to visit the Gulf of Mexico tomorrow.  BP stocks plummit by 7% when admission that oil is leaking faster than original speculations.  At current rate of oil leakage in 58 days it will surpass the Exxon Valdez disaster as the largest oil spill in U.S. history. BP official on the Today Show welcomes help from all parties including U.S. military. Concerns grow on impact to Louisiana seafood and tourism industry. As of 8:42pm, “Faint fingers of oily sheen have reached the mouth of Mississippi River…By sunset Thursday, the oil had crept into South Pass of the river and was lapping at the shoreline in long, thin lines.” Jean-Michel Cousteau releases statement of dismay and asks all ot expect more of their governments, “Write your Congressional and State representatives demanding their support for alternative energy technologies and policies at all levels of government, including subsidies.” Senator Bill Nelson FL-D drafts legislation to suspend the Obama administration’s plan of offshore exploration and drilling until a full investigation of diaster and the development of new protocols are developed.

Friday, April 30th-Satellite photos from NASA are released showing a finger of the slick reaching the delta.

68 Replies to “The Gulf Of Mexico Oil Spill: A Timeline”