KAZ – A new occasional series modeled from Ed Yong’s Pocket Science where I will briefly report a few cool studies and tell you why I think they are cool!

Kevin Raskoff from Monterey Peninsula College (where I got my start in science!) describes a new genus and species of jelly. Named Bathykorus (=deep helmet) bouilloni after Dr. Jean
Bouillon (1926–2009), a prolific and well-respected hydrozoan biologist who recently passed away. As described by Raskoff,

“Dr. Bouillon’s studies spanned over 60 years, and described 17 families, 34 genera,
and 114 species. His work and his generous sprit continue to enlighten and inspire generations of biologists.”

From eleven stations in the Arctic Ocean, he observed 423 of these little buggers (about 1.5 cm for the bell height) between 1300 and 2000 m depth.

Why is this study cool? Raskoff captured hundreds of these things and not one had any hint of their food sources! And, as he says in the final sentence of this paper:

“That a new genus and species can be found by the hundreds in a single expedition demonstrates how much is left to be discovered about the inhabitants of the deep sea, especially in the polar regions.” 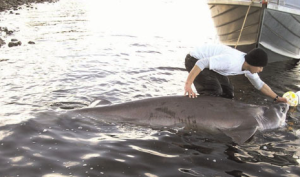 The picture to my left says it all. ITS A FRIKKIN BLUNTNOSE 6-GILL SHARK IN A FRIKKIN RIVER. And not just in a river mind you, 30 km up the Derwent River in Tasmania in 10 meters of water! While the authors were capturing 7-gill sharks, known to be a coastal species, the found this 3.4 meter deep-sea shark (found down to 25oo meters depth) attached to one of their bottom-set longlines.

Why is this study cool? It is the first confirmed report of an adult 6-gill shark in a river. The estuary where it was found is actually a shark refuge, perhaps that explains it? Anyways, I hope they a DNA sample, I wonder if might spreading some of the sharky love with the shallow 7-gills!

Siveter and colleagues discovered an exceptionally well-preserved fossil of a new genus and species of ostracod from a 425 million year old formation in the UK. The Herefordshire Konservat-Lagerstätte has proven to be a treasure trove of invertebrate fossils with well-preserved 3-dimensional structure. The paper itself deals with the internal anatomy of this ancient seafarer in great detail.

Why is this study cool? Nasunaris (nose-nostril) flata (breath of life) is the best preserved ostracod found from this time period. Even the gills were preserved.