I am very excited today!  My new paper in the journal Ecology will be coming out in April on the regulation of biodiversity in the deep sea.  NESCent is issuing a press release (below) written by our very talented, Communications Director Robin Smith.  Above is a high-definition Youtube video we put together for the occasion.

Durham, NC – Surplus food can be a double-edged sword for bottom-feeders in the ocean deep, according to a new study in the April issue of Ecology. While extra nutrients give a boost to large animals on the deep sea floor, the feeding frenzy that results wreaks havoc on smaller animals in the seafloor sediment, researchers say.

Descend thousands of feet under the ocean to the deep sea floor, and you’ll find a blue-black world of cold and darkness, blanketed in muddy ooze. In this world without sunlight, food is often in short supply. 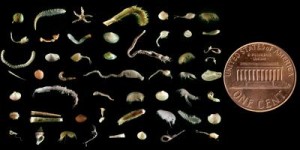 Animals in the deep sea survive on dead and decaying matter drifting down from above, said marine biologist Craig McClain of the National Evolutionary Synthesis Center. Only about 3-5% of the remains of microscopic plants and animals that feed life at shallower depths actually makes it to the deep sea floor, he explained. “If the ocean’s primary production were a 5-pound bag of sugar, that would be the equivalent of a sugar packet.”

Collaborating with James Barry of the Monterey Bay Aquarium Research Institute (MBARI), McClain traveled to the deep waters off the coast of California to an area of the ocean floor that receives an additional source of food. In a steep, winding, underwater gorge known as Monterey Canyon —similar in size to the Grand Canyon —bottom-feeders get a boost from nutrient-rich sediments that slough off the canyon walls and collect on the canyon floor.

“There’s typically more food available in the canyon than you would see outside the canyon,” Barry explained. “The stuff that rains down from above and accumulates at the base of the cliffs isn’t just mud – it’s food,” McClain added. “There are tiny food particles and bacteria in the sediment.”

The researchers wanted to understand how the surplus food affected deep sea life on the canyon floor. Buried in the sediment and hidden from view, a diverse world of tiny marine animals – snails, worms, crustaceans, clams, and other creatures no bigger than a pencil eraser – live and feed in the canyon mud.

To find out how these animals are affected by the boost of food, the researchers sent a Remotely Operated Vehicle (ROV) equipped with video and sampling equipment to the base of the canyon. Piloted from a control room onboard a ship at the ocean surface, the ROV dove more than a mile to the canyon floor. As the ROV crept across the seafloor sediment, it video recorded everything in its path and pushed plastic tubes into the mud, pulling up cores of and animals and silt.

When they brought the samples back to the surface, they found nearly 200 species in the sediment. But as they sampled closer to the canyon walls, they were surprised to find that despite the extra food and nutrients, the small sediment-dwellers (0.25 to 25 mm in size) became even smaller and less diverse. Why might this be?

A closer look at the video footage suggests the answer lies not in the sediment, but just above. As the ROV approached the canyon walls, the researchers noticed swarms of bigger, mobile animals – crabs, starfish, urchins, sea cucumbers and other seafloor scavengers – crawling on the sediment surface. Normally few and far between, these animals sense that food has arrived and converge at the base of the cliffs, the researchers explained. “The cliff face becomes a smorgasbord for larger animals,” said McClain.

Ironically, more food for big, mobile animals on the sediment surface is bad news for smaller sediment-dwellers buried below. The larger animals devour all the food in their path as they plow across the canyon floor, wrecking habitat and leaving little for other animals to feed on. “Larger organisms come in and they churn up the sediment and eat all the food. That has big consequences for smaller animals that live there,” McClain explained.

“The number of species near the cliff face was reduced by half compared to the middle of the canyon,” said McClain. “More food isn’t always better,” he added.

The team’s findings will be published online in the April 2010 issue of Ecology.

4 Replies to “When the dinner bell rings for seafloor scavengers, larger animals get first dibs”