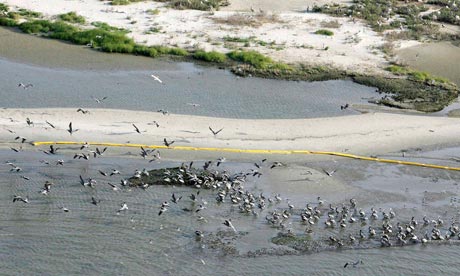 Right now, everyone is consumed by the immediate drama of the growing oil slick. What will it kill? Where will it go? Will it pollute all of the Gulf States or just a few? But when the oil is stopped and the damage is done, it will be time for BP to pay for the damage that it has done. And that’s where we’ll see if the scientific damage wrought by the Bush administration and the economic recession will harm the Gulf States.

Right now, the scientists in the audience are probably gently weeping. Putting a dollar value on, say, an oiled salt marsh is extremely difficult. While it’s relatively straightforward to estimate, say, how many endangered species of bird were nesting in this marsh, it’s very difficult to say how many larval fish and crabs were living there, and how this number changed from year to year. Nonetheless, the environmental laws of most states say that the best available science (which may have big uncertainty) must provide these estimates.

But here’s how it works in the reality of courts and lawyers: unless scientists and government agencies have a really good baseline with solid, consistent monitoring data, it’s really hard to prove that an ecosystem has been damaged. How can you tell how much marsh has been killed unless you know how much marsh was there in the first place? How many baby shrimp and snapper lived in these marshes before the oil? Can you attribute some or all of the losses to El Nino/Katrina/natural fluctuation/overfishing and not directly to the oil?

The task of monitoring ecosystems usually falls to government agencies or academic scientists with grants from government agencies. When the Bush administration drastically cut environmental spending, these are the programs that felt the burn. Take John McCain’s mocking of a grizzly bear monitoring program in Montana – these programs are not pork, but are key to enforcing environmental legislation currently on the books. And now, these programs will be called upon to provide absolutely critical baseline data on the pre-oil-spill health of the Gulf.

All this must be proven in a court of law, and without high-quality, multi-year data it is very, very hard. (This is why the Long Term Ecological Research Network is a shining beacon.) Even the best science will have uncertainty, and the difficulty of measuring ecosystem damage is well documented in the scientific literature. And if you think that climate models are complicated, wait until you see fisheries models. As environmental reporter William Dietrich wrote a couple days ago:

While the focus in coming weeks will be on defending the coast from oily tides, lawyers will parachute in ahead of beach workers. At issue will be how much wildlife and seafood was present before the spill, and how much was lost. The inventorying will pit legions of scientists from the Gulf states against legions of scientists from BP. While President Obama is holding BP responsible for restitution, just how much damage occurs? This will be the crucial question in the years of court fights to come. This disaster will mean full employment for a shrimp-bucket-full of attorneys and biologists.

That means the more the Gulf states know about their coastal environment, the more money they will collect at the back end. They’d better hope they haven’t gutted their environmental agencies, because they need them right now. Big Time. Count, count, count.

The oil companies will be doubly well served by their financing of climate denialists – by laying the groundwork for baseless criticism of climate science, they have also laid the groundwork for criticism of ecology and natural resource damage assessment. I think we will see all the same arguments as in the climate “debate” – the scientists are biased, the science is not “certain,” the ecosystem was damaged anyway.

The Deep Sea News team has roots in the South – Dr. M is originally from Arkansas, and my mother’s side is from Alabama. As a kid I spent several spring vacations on the gorgeous white sand beaches of the Florida Panhandle. I find it personally as well as professionally saddening that when it comes time for BP to pay, the denialists may prevent the people of the Gulf Coast States from getting full payment for the damage done to their livelihoods.

4 Replies to “How anti-science politics may harm the U.S. Gulf states”