Here is your oil spill update for Monday, May 10th.

The giant dome didn’t work, due to the formation of ice-like methane hydrate crystals. These crystals made the dome more buoyant and clogged the uptake pipe. The dome is now off the well and resting on the seabed.

BP is now discussing stuffing debris into the blowout preventer to contain the oil, a maneuver called a “junk shot.” From CNN:

Engineers are examining whether they can close a failed blowout preventer by stuffing it with trash, said Adm. Thad Allen, the commandant of the Coast Guard. The 48-foot-tall, 450-ton device sits atop the well at the heart of the Gulf oil spill and is designed to stop leaks, but it has not been working properly since the oil rig Deepwater Horizon exploded April 20 and later sank.

“The next tactic is going to be something they call a junk shot,” Allen told CBS’s “Face the Nation” on Sunday. “They’ll take a bunch of debris — shredded up tires, golf balls and things like that — and under very high pressure, shoot it into the preventer itself and see if they can clog it up and stop the leak.”

Winds are forecast to have an easterly component from Sunday through Monday. Mississippi Delta, Breton Sound and Chandeleur Sound continue to be threatened by oil contact with shorelines throughout the forecast period. The westerly movement of the oil is expected to continue though the forecast period with the western edge nearing Atchafalaya Bay on Monday.

The oil may reach the red areas on the map below by the end of today. 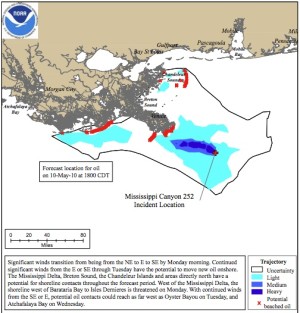 There are reports of tar balls washing up on Dauphin Island (off the Alabama coast), but it is not yet known if they are related to the oil spill. Anyone out there from the Dauphin Island Sea Lab?

Sharon Begley takes the cynical view over at Newsweek:

The legacy of environmental catastrophes is, instead, a hybrid of amnesia and habituation. That is, the public forgets more quickly now than in the past, and understands that no source of energy is risk-free….As a result, the effect of energy-related environmental disasters on public consciousness and public policy is becoming more and more fleeting.

The Gulf of Mexico SeaGrant Programs are compiling volunteer opportunities for those interested in directly helping out. (NOTE: as of Mon 10 AM PST their site is down.)

3 Replies to “Oil Spill Update for Monday, May 10”