Here is your oil spill update for Thursday, May 6th.

Yesterday, crews capped one of the three leaks in the Gulf of Mexico oil spill. However, like putting your finger on a hole in a garden hose, this did not reduce the total amount of oil leaking into the ocean.

Today, crews are moving to lower a giant concrete cap over the wellhead. From the NPR coverage:

Such an operation has never been tried at such extreme depth, said Doug Suttles, the British oil giant’s chief operating officer.

“You can imagine we’re landing a very, very large metal building on the sea floor to capture the flow,” he said. “This has to be done at a depth of 5,000 feet, so it’s a complex task.”

Once the cap nears the seabed, remotely operated underwater vehicles will be used to guide it into place. A steel pipe will be attached to a tanker at the surface and connected to the top of the cap to move the oil.

Potential pitfalls include the difficulty of placing the enormous cap in the right location, the danger of the cap’s pipe clogging with thickened oil, and volatile and explosive chemicals. Additional coverage can be found at the Washington Post. In the Boston Globe, Chris Reddy, a chemist at Woods Hole Oceanographic Institute, compared the oil spill to the Battle of Stalingrad.

According to the NOAA 24-hour prediction, the oil may make landfall in parts of Louisiana today. These are the red locations on the map below. You can download the original map, as well as 48- and 72-hour predictions at the NOAA Deepwater Horizon Incident website. 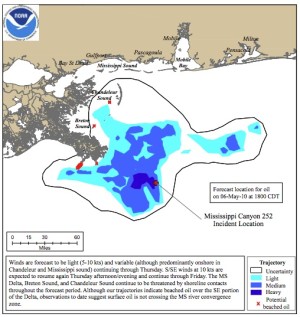 The Wall Street Journal has an excellent visualization of the spill by an architect. Google is also mapping the spill at a dedicated website.

There are unconfirmed reports of turtle deaths. From the AP:

Wildlife officials say at least 35 endangered sea turtles have washed up on Gulf coast beaches, but it’s not clear what’s killing them. Necropsies have shown no signs of oil.

Investigators will look into whether some shrimp boats taking part in an emergency shrimping season removed devices from their nets that are intended to allow turtles to escape, said Sheryan Epperly, sea turtle team leader for the National Marine Fisheries Service.