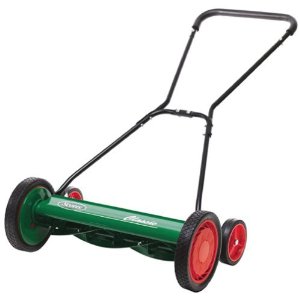 When I bust on my 1/2 acre yard weekly with my Scotts 20-Inch Classic Push Real Reel Lawn Mower, I draw a lot of attention from my neighbors. More than once I have been asked why.  This post is for all my neighbors.

First I want to be 70’s big. There is no doubt that pushing this puppy around my lot is one hell of work out.  If your idea of a workout is brisk walk to the refrigerator from your couch, then this may not be your thing.  On the other hand it is not nearly as hard as everyone with their big self-propelled gas mowers would lead you to believe.  It takes effort to push it but not enough to prevent drinking a beer or successfully smoking a cigar.

Second, is that our culture’s obsessive compulsion for the perfect lawn killed the Gulf of Mexico.  I won’t even touch base on pesticides or fertilizes.  For now let’s just focus on the fuel consumption.

The average mower consumes about 1 gallon of gas per hour of usage.  I am going to assume that it only takes 1 hour to mow a typical lawn.  I will assume that each household mows their yard twice a month for the months of April to September.  So the average family uses 2 gallons a month * 6 months.  For a total of 12 gallons.   In 2010, there are 114,825,428 households (Some may contend that not all of these have lawns, but this is likely balanced by the lawncare of commercial properties).

That amount is near equivalent to the conservative estimate for the total barrels leaked at the Deepwater Horizon site.  For a little sweat and $99, the choice should be clear.