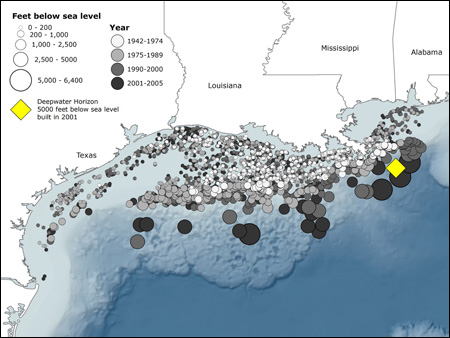 My original intent for this post was to provide a nice infographic detailing by percentage the operators/owners of all the oil platforms in the Gulf of Mexico.  After spending a few hours on the internet I found out that is not possible with the available data on the internet.  The Mineral Management Service does provide some data.  Looking at active lease holdings for the Gulf of Mexico, not the owners of the rigs themselves, pulls up at least 1,200 uniquely named companies with unique addresses. The extent that these actually represent subsidiaries of one another is a black box of confusing linkages. A list of platforms available for download  contains indecipherable MMS designation codes but contains no information on owners/operators.  If I had all the time in the world I could use RIGZONE and compile the data by hand…maybe.

Locations are provided.  If you are handy with GIS  and so inclined a map can be quickly constructed. I was going to attempt this but realized that Swordpress has done a fine job with a nice map and nifty Youtube video.

Perhaps I am off base in assuming that the counts, owners/operators, and locations of offshore oil platforms would be easy to obtain online?  Perhaps I expected way too much when I wanted this information without hours of searching and data manipulation?

Or maybe, just maybe, I am dead on when I expected as a citizen to have ready information about who and the extent of pillaging of the public commons.

17 Replies to “Oil Platforms in the Gulf: How Many and Who Owns Them?”