When I posted Iglu’s revised Oil Spill Timeline a few days, I didn’t give much thought to visual properties of the data presented in the screenshot I chose to represent. I was focused on the actual numbers. Sean Carroll quickly pointed out that it was a very misleading graphic because the circles were scaled by diameter rather than area. David Bradley fixed this figure to represent area. While it is not as “impressive” as the Iglu figure, it still relays the message of context. After reading Mark Chu-Carroll’s post at Good Math, Bad Math who explained how misleading circle charts can be in the financial sector when not scaled properly (the visual component is area, not diameter, which is a quadratic equation), I decided to take his advice and put the data into a bar chart (below), which more appropriately and just as effectively gets the point across.

But there is much more to the oil spill story than what was displayed on Iglu’s graphic. For instance, did you know that Nigeria has been battling oil spills for half a century? The general apathy surrounding the health of African people and lack of concern for their environment by large companies and politicians have created an enormous disaster of proportions that I was unprepared to discover. Last week, John Vidal wrote in the Guardian, “Nigeria’s agony dwarfs the Gulf oil spill. The US and Europe ignore it.” In this article he reported figures from various sources. To bring the Gulf oil disaster into context, I included two of these estimates: one from a report that estimated 50 years worth of oil spillage in Nigeria’s waterways and deltas through 2006 and the other a report from Shell of how much they spilled in 2009. As reported in the Vidal article,

“If this Gulf accident had happened in Nigeria, neither the government nor the company would have paid much attention,” said the writer Ben Ikari, a member of the Ogoni people. “This kind of spill happens all the time in the delta.”

“The oil companies just ignore it. The lawmakers do not care and people must live with pollution daily. The situation is now worse than it was 30 years ago. Nothing is changing. When I see the efforts that are being made in the US I feel a great sense of sadness at the double standards. What they do in the US or in Europe is very different.”

“We see frantic efforts being made to stop the spill in the US,” said Nnimo Bassey, Nigerian head of Friends of the Earth International. “But in Nigeria, oil companies largely ignore their spills, cover them up and destroy people’s livelihood and environments. The Gulf spill can be seen as a metaphor for what is happening daily in the oilfields of Nigeria and other parts of Africa.

“This has gone on for 50 years in Nigeria. People depend completely on the environment for their drinking water and farming and fishing. They are amazed that the president of the US can be making speeches daily, because in Nigeria people there would not hear a whimper,” he said.

What is happening in Nigeria could very well have been the Gulf, if not for what little government oversight and public concern we do have in the United States. Unfortunately, we could slide into a catastrophic state like Nigeria, if we let down our guard for even a second. It is in the people’s interest to remain vigilant on this issue!

While mulling over this data with my colleague and office mate Andrew, who blogs at Southern Fried Science, he mentioned that a huge amount of oil goes out into the ocean each year from large cities as stormwater runoff. He looked up some data and found some figures from Puget Sound that were quite amazing. Eric De Place reports data from Washington’s Dept. of Ecology on Sightline Daily that places the runoff pollution from oil, grease and petroleum into Puget Sound at the low-end of 21.8 million lbs per annum. I used the conversion of 7.3 lbs of mid-grade density oil per gallon and came up with the figure of 159 3 million gallons of oil-based runoff into Puget Sound per year. This is equivalent to more than one Exxon Valdez each month every 4 years.

It is very clear that the Deepwater Horizon spill is far from over and that figure will need to be revised repeatedly. The point I hope that this graph makes is that while the economic and sociological fall-out is disastrous for Gulf residents, in the context of Nigeria and what happens in the Seattle area each year there are much larger issues at stake here. 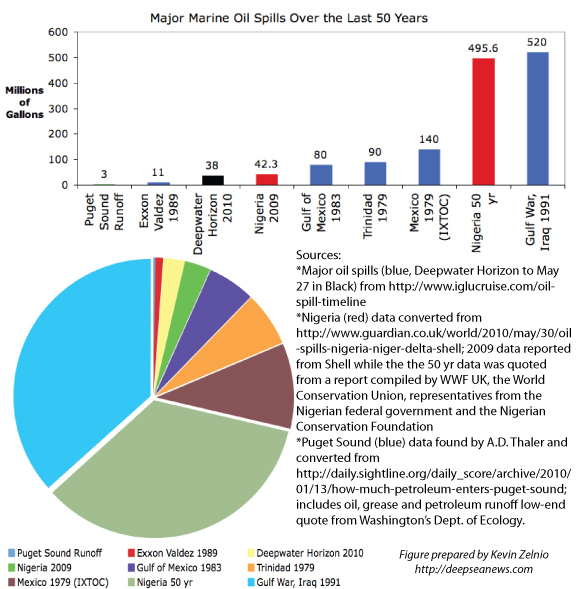 Figure has been from original version, see comments.

While the Nigeria case may be more obvious, lets look at what has been happening in our own backyard for years. Aside from major spills in Alaska and the Gulf, Puget Sound experiences catastrophic oil spills each year in the form of runoff if this data is to be believed. I don’t have time to look up all the data for every major city in the US or abroad, but we can use the example from Puget Sound as a case study and extrapolate to major coastal industrial urban areas in the western world. Every 4 years the Puget Sound experiences a Deepwater Horizon, on average each month they have an Exxon Valdez. Why is this not more of an issue? My guess is that because as stormwater runoff it is not as visible and spread out over the course of a year rather than all at once over a few days to weeks. I would like to get data at the county level in Washington to compare socioeconomic indicators among counties living near the Puget Sound and away from the Sound.

The Puget Sound is home to a (once) productive oyster and clam fishery. Though many of the native Olympia oysters (Ostrea conchaphila) are displaced by introduced oysters from Japan, there are large commercial and recreational revenues as well as many aquaculture facilities. Pacific northwest oysters make their way all over the country in some of the finest restaurants, including Florida and Louisiana. Being filter-feeding animals in coastal estuarine habitats, these animals should bear the brunt of the runoff effects. Indeed, as reported last Fall by Jonathan Huang in the Seattle Times,

As of the latest Puget Sound Partnership’s State of the Sound Report, overall stormwater runoff (and not point sources, such as waste discharges or industrial spills) remains the largest contributor toward restrictions of shellfish harvesting.

Runoff is a major consequence of development: As the proportion of impervious surfaces such as roofs, roads and parking lots increases, the ability for the ground to absorb water decreases. Consequently, runoff containing petroleum products, heavy metals, pesticides and human and animal waste disperse throughout the Sound and often make the shoreline too contaminated for safe shellfish production.

In 2005, nearly one-third of the Sound’s available shellfish farming area had high enough bacterial pollution to restrict harvesting. Thirty-six farming areas were listed as threatened at least once between 1997 and 2006. Over the past 25 years, the area available for commercial shellfish harvesting in the Puget Sound has been reduced by nearly 30,000 acres, especially in the urbanized corridor between Tacoma and Everett.

The parallels between Puget Sound’s bivalve fisheries and the Gulf’s coastal bivalve and shrimp fisheries should not be too hard to see. The Gulf is a productive seafood producing region for much of the US and the impacts will be felt nationwide.

By putting the Deepwater Horizon oil catastrophe in this context, I do not mean to demean or belittle it in any way. Rather, I hope to show that while we do not have it as bad as Nigeria, we could head that way if we do not stand up for our environment, livelihoods, economy and health. While you may or may not appreciate the deliciousness that is the oyster, the economic effects of a fishery perhaps quite distant from you will be felt beyond the small coastal town, the region and encompass a nation as we grip with inadequate and contaminated food, not to mention to the rising cost of seafood – a major dietary component of Americans.

16 Replies to “Putting Oilmageddon 2010 in Context”