It has been known for a long time that some anemones form symbiotic relationships with Zooxanthellae. For a while it was assumed that the anemones mainly persisted by utilizing carbon translocated from its symbionts, called autotrophy, but they can may supplement this by heterotrophic feeding on plankton. A study by Bachar and colleagues followed the fate of carbon derived via autotrophy versus that derived from heterotrophy using radiolabeled carbon sources.

To trace the pathway of autotrophically-derived carbon CO2, the carbon substrate of photosynthesis, was labeled with a radioactive isotope (14C in sodium carbonate). The fate of heterotrophic carbon was tracked by feeding the anemones brine shrimp (Artemia sp.) raised on algae incubated with the same radio-labeled CO2 source.  In what is referred to as a Pulse-Chase experiment, the anemone was pulsed with radio-label in the seawater for 12 hours in the light and 12 hours in the dark. During the “chase” period the anemone is removed from the radio-labeled environment. At this time, the products of photosynthesis make their way from the Zooxanthellae into the tissues of the anemone.

Finally, you make an Anemone Slushie!  The recipe is as follows:

Place experimental anemone in coffee bean grinder or blender for 30-60 seconds at medium speed. Pour mixture into a vessel, place in centrifuge (don’t forget to balance!) and spin for 5 minutes, ensuring all algal cells are at the bottom of vessel. Pour top portion containing anemone tissue slurry into a new vessel and discard algal portion. Add a dash of acid to remove unassimilated inorganic carbon. Voila! You have yourself a delicious Anemone Slushie, a tasty family treat.

What Bachar and colleagues did was to trace the fate of carbon in the lipid portion of the Anemone Slushie in addition to the whole tissue (i.e. animal) portion of the Slushie. What they found was interesting: 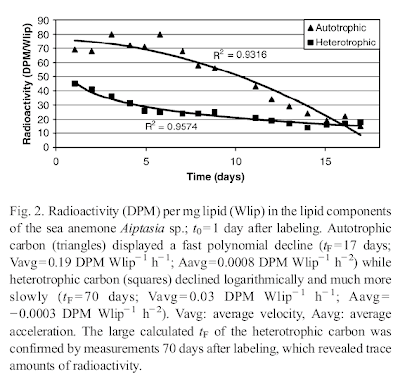 Autotrophic carbon, derived from carbon dioxide, is a short chain molecule so it makes sense that this would be used as an immediate energetic source since it can be easily converted into molecules like pyruvate and acetate which can ease right in to the metabolic cycles. On other hand, heterotrophic carbon is typically longer chain, like fatty acids and sugars, which need to be broken down into smaller parts to be used for metabolism. These might be more appropriate carbon sources for structural components which are typically longer-chain carbon compounds like collagen and phospholipids.

Though scientists have known about algal-cnidarian symbioses for a long time, it has taken decades of work to just figure out the what and how. Bachar and colleagues’ paper gives us the where and some further insight in some more of the how. It is still unclear “why” though and the “how” in an evolutionary sense. Symbiosis is a field still very ripe for exploration. All the studies ever done on host-symbiont phylogenies, carbon translocation, physiological ecology are just the tip of the iceberg. Autotrophic symbioses are everywhere and occur in many animal phyla from cnidarians to nematodes to molluscs.