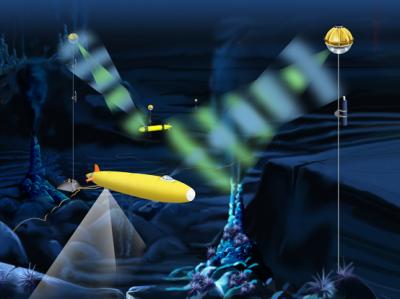 Illustration shows how the optical modem could function at a deep ocean cabled observatory. Autonomous underwater vehicles (AUVs) collect sonar images (downward bands of light) and other data at a hydrothermal vent site and transmit the data through an optical modem to receivers stationed on moorings in the ocean. The moorings are connected to a cabled observatory, and the data are sent back to scientists on shore. Scientists, in turn, can send new instructions to the AUVs via the optical modem as well. (E. Paul Oberlander, Woods Hole Oceanographic Institution)

Using the 11,000 meter-rated Nereus hybrid remotely operated vehicle (HROV) as a test platform, engineers at WHOI recently demonstrated a new communications and control system that integrates acoustics with optics. This achievement, they say, opens the way to new opportunities in communications between untethered remotely operated vehicles (UTROVs) and their human operators—literally “cutting the cord” for undersea exploration…Bowen, Farr and their colleagues successfully tested an underwater optical modem, which allows instant data transfer and real-time video from battery powered un-tethered ROVs outfitted with sensors, cameras and manipulators to surface ships.

One Reply to “New Communications System Promises Untethered, Undersea Vehicles Who Will Destroy the World”