As some of you may know, my graduate research is on plastic debris in the North Pacific Central Gyre. While I am deeply disturbed by the incredible amounts of plastic permeating our oceans, I also feel that taking a critical, scientific look at this issue is key to finding a solution. Misinformation on this issue is rampant – for example, I’ve waged a personal war against this image, which is neither trash nor a gyre.

Which brings me to “Recycled Island.” A Dutch architecture company has proposed to take all the plastic floating in the North Pacific Central Gyre and mold it into a vast island. I first became aware of this when renderings were published on Inhabitat in April, but it has come to the forefront again with articles in io9 and the Guardian, and a post in Metafilter. (Tip of the antennae to Adam E. &  Jonathan Gitlin. Ed: Also Ethan!)

According to the Guardian article:

Recycled Island is a plan to clean up 44 million kilos of plastic waste from the North Pacific Gyre, which stretches from California to Japan, and provide 10,000 square kilometres (3,861 square miles) of sustainable living space in the process. Solar and wave energy would provide power for islanders while sustainable fishing and agriculture could provide their food.

Great! No longer will I need expensive oceanographic cruises to study the open sea! On Recycled Island, I’ll be able to catch exotic open-ocean invertebrates from the comfort of my own recycled porch! But of course, there are a number of issues with this rather romantic plan. And as your friendly neighborhood ocean blogger (who did lead an expedition to measure plastic in the gyre last summer), it is my duty to crush my own hopes and dreams of completing my graduate studies on a luxurious and environmentally correct island, sipping tropical drinks adorned with tiny recycled umbrellas.

The main problem is this: The vast majority of plastic bits (>90%) are smaller than a pencil eraser, and are spread out enough to be mostly invisible to the naked eye. It is therefore extremely hard to remove the plastic without catching a lot of ocean life.

Please allow me to quote myself, from the SEAPLEX FAQ:

The vast majority of the debris is tiny, hard-to-see pieces. The debris is like a thin soup, with some big pieces like nets and bottles intermixed. It looks like this.

We did not observe an island or floating landfill. Our photos are representative of what we saw – larger pieces floating by every minute or so, with the space between filled up with tiny, nearly microscopic bits.

This means that these pieces are the same size as much of the zooplankton. In fact, most of the organizations who have been out to the gyre to measure plastic have used fine-meshed nets (333 microns, for the most part) that are designed to catch zooplankton. When a swimming-pool sized bit of ocean is concentrated into a jar, you get a bunch of little plastic bits, but you also get a bunch of zooplankton. Here’s an example from the SEAPLEX cruise last year: 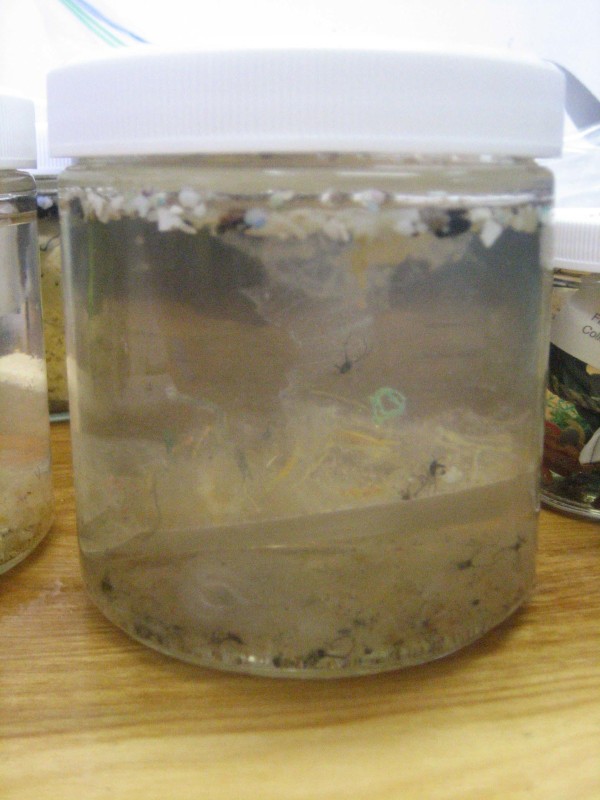 Results of a zooplankton tow (using a 333 micron manta net) in the North Pacific Central Gyre, August 2009. This is NOT what the ocean looks like - this pint jar concentrates about a swimming-pool-sized parcel of water. The colored bits on the top are plastic, the beige and black bits on the bottom are zooplankton.

The “Recycled Island” folks may be able to build a giant island out of recycled plastic – I am not an architect and I have no idea if this is feasible. (Though I hope they know that there are hurricanes in Central Pacific…) But I do know that  it would be very, very difficult to remove a significant percentage of the plastic without catching a ton of zooplankton. And catching and killing tons of marine life would not be a good way to meet the criteria of the project. From the Guardian article:

I could say a lot more about how little is known about the impacts of plastic in the North Pacific Central Gyre, or about the ridiculous notion that adding a giant land mass would “return more balance” to the open ocean – but I’ve got to sleep sometime. So to summarize, I do not think Recycled Island is feasible because it would be environmentally damaging to collect enough plastic in the North Pacific Central Gyre to build their enormous island.

[cross-posted to the SEAPLEX blog]