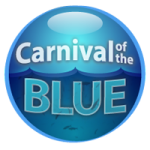 Carnival of the Blue

Mike Bok of the sensational Arthropoda blog has the latest Carnival of the Blue (edition #39!) up. Lots of great reads. Next month is held at our good friend Angelo’s Saipan Blog. For “Carnival of the Blue XL: Top of the Food Chain” edition send in your posts about predation in particular. Angelos is calling out for shark stuff, but let’s show everyone who is REALLY at the top of the food chain. I mean, sharks are really sub-par at best.

Physics prof and history of science buff, Dr. Skyskull, has an epic post about the history of research on the Giant Squid over at his new blog on Scientopia. It is one of the best posts I’ve read in a long time. Please do it some justice and read it, at least look at the pictures!

For those who don’t know, in 1873 a fisherman had a genuine battle with a giant squid off the coast of Newfoundland.  This battle, the only one of its kind I am aware of, was also momentous in that it resulted in the first giant squid specimen studied scientifically on land!

Culturing Science has two very well thought out post on Inevitability and Oil (part 1 and part 2). I agree with most of what she is saying, especially this quote from part 2:

While economists often like to talk about the “end of oil,” I don’t have a good feel for the public mindset on the topic.  While the “sustainability movement” is picking up speed, it often feels to be, frankly, bullshit sold at Whole Foods wrapped in 10 layers of plastic packaging to make people feel better about themselves.  I can tell you this: I hadn’t noticed so much attention aimed toward ending our oil dependence until we saw pictures of pelicans covered in oil right in our own backyard, our own fishing grounds, affecting our own people in the BP oil spill.

While a competitive species should be concerned about this for their own sake, this recent rise in “oil awareness” is instead due to the harm we’re causing other species.

Carl Zimmer has a well-written article up at Yale’s  360 Environment magazine titled “A Looming Oxygen Crisis and Its Impact on World’s Oceans” (nice job of working Loom into the title Carl ;)… ). In particular, worth a read as he links ocean acidification and dead zones together, something rarely done but a great way to link two issues that are effectively acting synergistically in our oceans.

One our favorite blogs at DSN is Time to Eat the Dogs, written by author and University of Hartford history professor Michael Robinson. It is a blog about the history of science and exploration. It is much more than a historical account. Michael has a fantastic talent at being to humanize the journey of scientists and explorers. He doesn’t update often but when he does it is always a wonderful read. WNPR’s Where We Live radio program interviewed Michael and a very insightful conversation ensued about exploration, plus he gives some nice lip service to DSN! “Deep sea news is a great blog where they talk about the invertebrates of the wild and the explorations to these places”. Thanks lot Michael! Also on the program were discussions of cave and tree canopy exploration that were really cool.

Over at Mind of a Markov Chain, blogger apeescape created a neat animation of bluefin tuna tracks during the time of the oil spill plotted on Google Earth. This follows on the heels of the great Teo & Block 2010 paper in PLoS One on Bluefin tracking.

Finally, I am sucker for anything by or about T.H. Huxley. Eric Michael Johnson of the Primate Diaries has a superb post “The Scientist and the Anarchist: Part I” as part of his Exile tour over at Cocktail Party Physics. In here he put Huxley in light on his upbringing in Victorian East London. Huxley, who would later become of one the greatest anatomists and champions (and confidant) of Darwin’s theory of evolution by natural selection, was shaped by growing up in one of the “most profound failures of urban planning the world has ever seen” and a “society on the brink of collapse”.

If the city is an ecosystem, Huxley embodies the phrase “survival of the fittest.” Lanky and high-strung, estranged from his father at an early age, and the youngest of six children, Huxley was primed from birth to view life as a struggle.

Cannot wait for part 2 next week!

One Reply to “The Giant Linkopod”